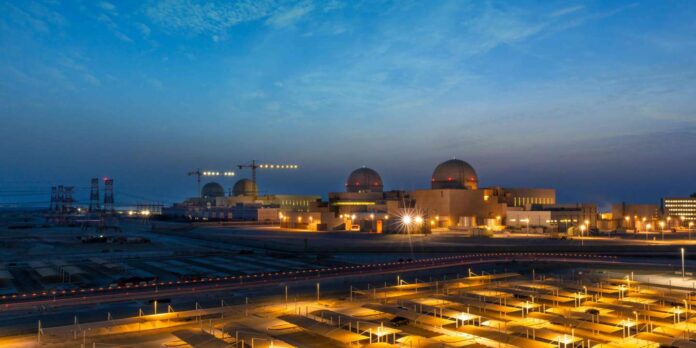 United Arab Emirates entered on Saturday 1er August in the club of countries using civilian nuclear energy with the commissioning of their Barakah power plant, the first in the Arab world.

“We are announcing today that the United Arab Emirates have successfully commissioned the number one reactor at the Barakah power plant”, tweeted Sheikh Mohammed Ben Rachid Al-Maktoum, Prime Minister of the Emirates and Ruler of Dubai.

“This is a historic moment for the Emirates in their goal of providing a new form of clean energy to the nation”, commented Hamad Alkaabi, representative of the Emirates to the International Atomic Energy Agency (IAEA), also welcoming the “Success” from the start of the installation.

Article reserved for our subscribers Read also “Nuclear power has become one peril among many others”: the fight against the atom is no longer successful

The Emirates announced on February 17 that it had given the green light to start the plant after a series of tests and had entrusted its operation to Nawah Energy Company. This company, founded in 2016, will eventually operate and maintain the four reactors at the power plant located in the north-west of the country. “This is a new step in our march towards the development of peaceful nuclear energy”, then rejoiced Mohammed Ben Zayed Al-Nahyane, Crown Prince of Abu Dhabi.

The facility was built by a consortium led by Emirates Nuclear Energy Corporation (ENEC) and South Korea’s Korea Electric Power Corporation, at an estimated cost of $ 24.4 billion. The first of the four reactors was due to be commissioned at the end of 2017 but the start date has been postponed several times to meet, according to officials, the legal safety conditions.

A “threat to regional peace” according to Qatar

When fully operational, the four reactors will have the capacity to produce 5,600 megawatts of electricity, or about 25% of the needs of the oil-rich United Arab Emirates. ENEC, a state-owned company, announced in December that loading of nuclear fuel into the reactor would take place in the first quarter of 2020.

The federal state of seven emirates has a population of 9.3 million, of which around 80% are expatriates. Electricity needs are increasing, in particular because of the use of air conditioning during scorching summer.

Emirati officials have insisted on the character “Peaceful” of their nuclear program and ensure that it does not contain any military component, in a context of heightened regional tensions. “The Emirates remain committed to the highest standards of nuclear security and non-proliferation as well as strong and continued cooperation with the IAEA and national and international partners”, underlined in February Hamad Alkaabi. The country has hosted more than forty international missions and inspections by the IAEA and the World Association of Nuclear Operators since 2010.

But neighboring Qatar sees the Barakah power plant as a “Threat to regional peace”. Like several of its allies, including Saudi Arabia, Abu Dhabi is diplomatic cold with Qatar, with which it has not maintained official relations since June 2017.

Abu Dhabi also maintains strained ties with Tehran, which was also heavily sanctioned by the international community for its controversial nuclear program until an agreement was signed with the major world powers in 2015 in Vienna. But Washington unilaterally withdrew from the deal in May 2018, reinstating several packages of sanctions against Iran. As a result, the latter notably resumed uranium enrichment in September 2019 at its Natanz site.

Located on the coast, Barakah is therefore only separated from Iran, which faces it, by Gulf waters. Great ally of the Emirates, the United States leads a policy of “Maximum pressure” against the Islamic Republic, accused of sowing trouble in the region.

Demand for Covid-19 grew in some jobs

Coronavirus.- China confirms one more day without cases of coronavirus in...

Infectologists advised Alberto Fernández to restrict quarantine as much as possible...

these are the 20 most outstanding phrases of Alberto Fernández

6 PSYCHOLOGICAL THRILLERS that will play with your mind / Argentina...

Mark Kelly of NASA in the Senate

Why ARGENTINES consult to settle in URUGUAY