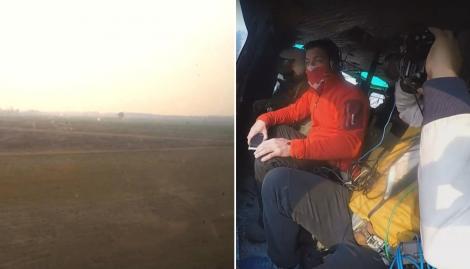 Aerial and ground teams continue with the extinction of the fire caused by the burning of grasslands that affects the area of ​​islands that extends between Rosario and towns of Entre Ríos. The team of TN It flew over the fire area this Friday in an army helicopter. “It’s amazing the amount of life you see in those wetlands, “ said the journalist José Bianco.

“Today should be a day with the celestial sky and it is not because of the smoke. Meanwhile, they continue fighting the fire,” Bianco reported from above.

The images captured from the helicopter and the details of the fires can be followed in a special program of Phenomena this friday of 22 to 24.

Bianco recounted what is seen in the area from above: “It is all brown, completely dry. There is almost nothing green. There is a lot of animal life, especially birds and other species that escape the flames. “

“Seeing the amount of life in these wetlands is even sadder. This situation cannot continue, added to the smoke that is breathed in the air,” he added.

From Entre Ríos and with the flames behind him, Bianco highlighted: “The people lives with the smoke every day of the year, or at least half. “

“Today we were in one of the command centers and we flew over the area. The fire is quite accessible to be fought, it is not that they are huge trunks, here it is grassland, burning grass. With blows one extinguishes it, but there are so many lights and they light them up from time to time, that they are going to have to attack them differently, “he said.” You have to anticipate, control them and punish whoever caught them, “he said.

The fight to contain the fire

The Ministry of Security continues to provide assistance to the governments of Santa Fe and Entre Ríos to fight the fire. As indicated from the portfolio, they have already been made available to the authorities means of transportation, logistics and communications in the affected areas.

“This joint work enabled close coordination between the provinces involved to deal with the systematic burning of grasslands that affect the population and the environmental ecosystem of the area, “they noted.

To the suffocation and control actions of the area were added 45 members of the Albatros group of the Argentine Naval Prefecture, deployed under the orders of the Minister of Security Sabina Frederic, who carry out patrols, vigilance actions and early alerts to identify suspects of the intentional burning of grasslands and prevent further burning.

With the objective of increase preventive policies and in response to these fires, a meeting was held in the entrerriana city of Victoria with the participation of the director of the National Fire Management Service, the secretary of Civil Protection of Santa Fe, the Minister of Government and Justice of Entre Ríos, the Mayor of Victoria, councilors and the Chief of the Entre Ríos Police.

what you see first shows how you are in life /...

UK measures against the rest of the world

“Telenoche”: Yolanda, the grandmother whose love and thanks story went viral

Bitcoin: why it is already at the border of US $...

Republicans aim for Supreme Court confirmation ahead of presidential election

What is Nipah, the virus that threatens to start another pandemic ...

They reveal how much money you have to earn per day...