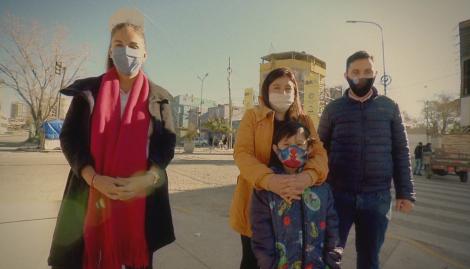 One of the few good news of this pandemic is the number of recovered. In Argentina there are almost 84 thousand. And behind each of them is a story. Giuliano, together with his mother, father and his little sister, were isolated in a Buenos Aires hotel for 10 days when they detected that they were covid positive. They had no severe symptoms and were able to carry the disease in isolation.

But in those days they were at the hotel something happened. Giuliano turned 7 years old. It was a special moment and in a delicate situation because I did not know if they could develop symptoms at any time. But the volunteers who worked at the hotel to care for those with the virus decided to surprise Giuliano. And it was like this, they surprised him and celebrated his birthday.

Two months later, Telenoche was in the reunion between them. Her mother Vanesa could not resist the emotion when she saw José and Celeste, the volunteers who organized the birthday. The camisoles were “tuned”, there were wigs and even a cake made by themselves. With a protection in between to avoid contact, Giuliano lived a party that will be truly unforgettable.

“The best thing that happened to us was seeing him jumping” Vanesa says that she knew she could get a fever. “I did not expect that show of affection towards us” Giuliano’s mother says. To close, they all promise a meeting for when the pandemic ends and they can hug. But this continues. It was not enough with the surprise that Giuliano received on his birthday. When they say goodbye, there are new gifts for him and his sister. A necessary and exciting story in the midst of the pandemic