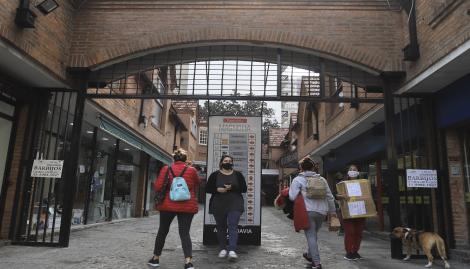 The City of Buenos Aires confirmed on Saturday the consolidation of stage 1 announced two weeks ago: a gradual opening of the industries will be carried out and local businesses will be opened in high-circulation avenues, except for Avellaneda and transfer centers such as Retiro , Once, Constitución and Liniers.

From Monday they will open:

Local retail stores on avenues, including clothing and footwear, in the following areas of the City:

– Av. Córdoba, between Lavalleja and Thames.

– Av. Santa Fe, between Laprida and Jerónimo Salguero, and Av. Coronel Díaz, between Beruti and Güemes.

– Av. Raúl Scalabrini Ortiz, between Aguirre and Camargo, and Av. Corrientes, between Julián Álvarez and Acevedo.

– Av. Santa Fe, between Gurruchaga and Av. Juan B. Justo.

They will continue to be excluded:

-The Liniers, Retiro and Constitución transfer centers, the Once area and the shops on Avellaneda Avenue.

In accordance with the foreseen scheme, starting Monday the industries that already have their protocol approved will return and, as the rest of the protocols are closed, the others will resume their activities. The textile, metal, and lumber industries are going to be enabled. Also the toy industry, according to Horacio Rodríguez Larreta, taking into account the proximity to Children’s Day, which will be on Sunday, August 16.