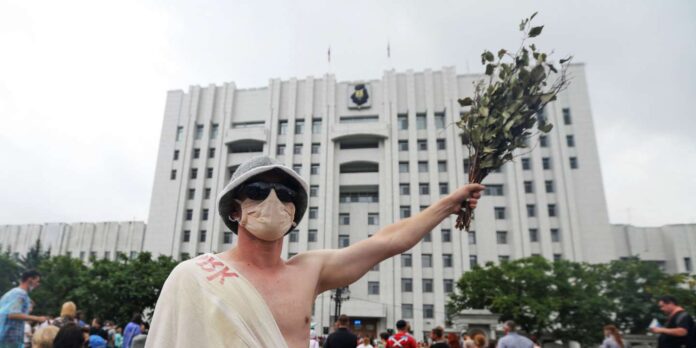 Several thousand demonstrators braved the rain again on Saturday 1er August in Khabarovsk, in the Russian Far East, to protest the arrest for murder of the popular governor of the region.

For the fourth weekend in a row, protesters roamed the streets of this near-Chinese city, chanting slogans hostile to the Kremlin and supporting ex-governor Sergei Fourgal, arrested on July 9 and transferred to Moscow, where he is imprisoned.

Sergei Fourgal was elected governor in 2018, largely defeating the Kremlin candidate. Locals believe his popular arrest for alleged murders dating back to the mid-2000s is politically motivated and wonder why he will be tried far from Khabarovsk. This protest movement against the government has been the largest for several years in Russia outside of Moscow.

“Not just for us, but for all of Russia”

“They arrested the governor as the last of the thieves and showed him to the whole country. It’s a slap in the face for us, as citizens who have chosen it. We are not for anarchy, we are for power, but for the power of the people “40-year-old resident Stanislav Nassonov told Agence France-Presse (AFP).

“They deprive us of our choice. People got some kind of window [après l’élection de M. Fourgal] in their life, but they closed it. And we are protesting for this window to open again. And not just for us, but for all of Russia ”, said Piotr Smirnov, another 65-year-old protester.

Article reserved for our subscribers Read also In Khabarovsk, “we tasted democracy, now we defend our rights”

The protest drew fewer people on Saturday than a week ago, when local media estimated 35,000 to 50,000 people took to the streets. According to journalists on the spot, around 30,000 people responded while the Khabarovsk town hall estimates that only 3,500 demonstrators came, assuring that “The interest [retombait] “ for demonstrations.

Demonstrations in support of the Khabarovsk movement, bringing together a few dozen to a few hundred people, were organized in several cities in Russia. Last week, the Kremlin claimed the protests were fueled by opposition activists from outside the region.

According to the NGO OVD-Info, which specializes in monitoring arrests on the sidelines of demonstrations, 55 people were arrested across the country, including 21 in Saint Petersburg, 13 in Moscow and five in Vladivostok, another major city in the country. Russian Far East.

Article reserved for our subscribers Read also In Russia, Vladimir Putin faces a fall in popularity

Coronavirus | The crude story of the brother of the Argentinean...

Fires in Córdoba: the rain brought relief and extinguished all active...

Can you answer these 3 questions?

BANKS will not open during the next week

Opposition from Venezuela investigates possible resale of oil by Cuba

They violated the quarantine, insulted and lied: they were detained in...