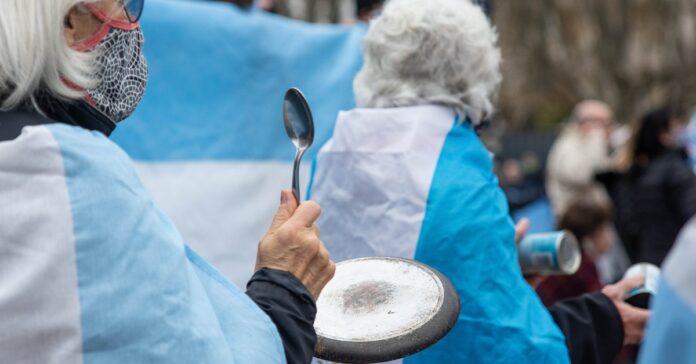 The pro-government bill to reform the Justice was formally presented this week and yesterday entered the Senate. After hearing the news, in various parts of the city of Buenos Aires a pan was felt in repudiation of the initiative and at the same time A call to mobilize to the Buenos Aires center began to go viral through social networks.

Under the hashtags “NoALaReformaJudicial”, “1ASalimosTodos” or “1AYoVoy” Opposition sectors called for concentration This Saturday at 4pm at the Obelisco of Buenos Aires. The modality imitates the march that halted the nationalization of the Vicentin cereal factory.

In Internet, Users who joined the call argued that the initiative seeks “impunity for Cristina Kirchner”. In this sense, messages such as “Today it is a civic duty to go out to defend democracy”, “We have an urgent commitment, show that there are many of us who do not endorse impunity” and “Let’s win the street once again to reestablish the Republic” and end the mafias ”.

Yesterday, the cacerolazo had a greater participation in the neighborhoods of Palermo, Recoleta, Villa Urquiza, Belgrano, Colegiales, Almagro, Villa Devoto and Caballito. There were also aftershocks, although minor, in some municipalities in the province of Buenos Aires such as Avellaneda, Tigre and Acassuso.

On Wednesday, the President of the Nation led the presentation of the Justice reform project and provided some details regarding the modification of the structure of the federal jurisdiction.

Just as a part of society reacted shortly after the presidential announcement, the main Together for Change leaders questioned the government’s initiative and pointed to the current vice president as the main promoter of the project.

Among the most questioned points is the formation of an Advisory Commission with specialists related to Peronism and Kirchnerism, such as Carlos Beraldi, attorney for the vice president; his former partner in the law firm, León Arslanian; or the member of the group K Justicia Legítima, Omar Palermo.

During the announcement, the President confirmed the criticism of Justice that he had outlined when he gave the opening speech for ordinary sessions on March 1. “There is only one organization of judges who seek to satisfy the desire of the powerful. Let’s say never again to a justice used to settle political discussions and never again to a policy that judicializes dissent to eliminate the adversary on duty ”he expressed.

And he added: “We propose to better organize federal Justice. We are proposing an independent Justice that develops the processes with speed and efficiency. We are building a fair Justice on which the media, factual and political powers do not influence. If we succeed, we will have strengthened this democracy that owes so many debts to Argentines. And we will also have paid off one of those debts that democracy has with society ”.

Among other things, the official project creates a new federal forum for the city of Buenos Aires. These are the courts that investigate the causes of corruption of the political and economic power and of public officials. But also organized crime such as drug trafficking cases, kidnappings, human trafficking. That jurisdiction – the Comodoro Py courts – has 12 first instance courts. The project unifies them with the 11 courts of the economic criminal jurisdiction, which is also federal and handles cases of contraband and tax and customs crimes.

With that merger the courts are 23 but they will become 46 because each one has two secretariats that will pass to be judged. The goal is to liquefy the power of the historic 12 federal judges who in many cases are politically wielded.

Judicial reform: what will be the strategy of Kirchnerism in the Senate to prevent the project from slowing down in Deputies

Government will negotiate with the airline to stay

Why Justin Timberlake and Jessica Biel have hidden the birth of...

In May there will also be help for companies to pay...

“It will be a labor to rebuild the economy after this...

US considers re-entering Cuba into list of states that sponsor terrorism:...