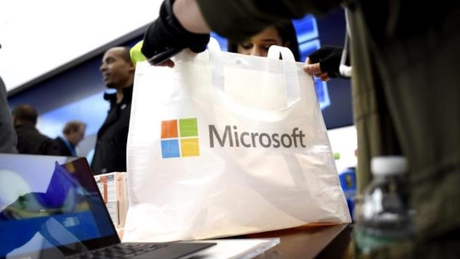 US lawmakers became fixated on the company with its increasing popularity and the possibility that the Chinese government could influence it.

Amid the announcement of the closure of almost all of its stores, Microsoft is negotiating the purchase of the popular china video app TikTok, which has become a mass phenomenon worldwide.

However, the government of Donald Trump was considering ban it in America for the possibility that it is a problem of National security and for the privacy of Americans, as reported by The New York Times.

The sources consulted by the media did not specify where the conversations are, which could lead to the entry of the giant Microsoft in the shareholding of the application, owned by the Chinese company ByteDance, which is valued at about 100,000 million dollars.

The Trump Administration was considering, among other measures, forcing ByteDance to ditch assets in the United States, especially TikTok, which it acquired in 2017.

According to The Wall Street Journal, the decision to force ByteDance to carry out that divestment would have been made, although the president himself, in statements to the media, hinted on Friday that there is nothing definitive for now.

“We are looking at TikTok. We could ban TikTok“said the president, who assured that there were different options on the table.

App popularity in the US

Other measures against the Chinese company, creator of Tuotiao, the largest news portal in China, which the US government was considering, was to include ByteDance in the list of foreign entities that cannot acquire products and services in the United States without prior authorization.

US lawmakers began to notice TikTok with the astronomical increase in popularity in the United States and to worry about the possibility that the Chinese government can influence the company and this, in turn, may yield american data or promote certain content to influence US politics or other areas.

These suspicions against TikTok also coincide with the increase in tensions between China and the United States due to industrial espionage and commercial disagreements.

For their part, the application seeks to demonstrate that these accusations are totally false and unfounded, and that the information published in the United States is stored in that country, with support in Singapore.

Kevin Mayer, CEO of TikTok, assured in his blog that the application is “apolitical” and his only will is to grant a funny platform for its users. “We are not politicians, we do not accept political publicity and we do not have an agenda; our sole objective is to remain a vibrant and dynamic platform for everyone to enjoy,” he said.

The Chinese firm has also considered the acquisition of US investment funds such as Sequoia Capital or General Atlantic.

TikTok in the world

Founded in 2014, TikTok has grown with ByteDance’s worldwide purchase and to be a leader in viral video for teens and celebrities.

It is one of the social media platforms that has grown the fastest in the world and that presents an alternative version of sharing and interacting online, since it allows users to create short videos with music, filters and other features.

It is one of the Applications that has been downloaded the most in the world in recent years, with 2,000 million downloads between the Google Play Store and the Apple App Store (Sensor Tower 2020).

The application reached 1 billion in February 2019, it took just under eight months to reach another 500 million, and by the end of February 2020 it reached 2 billion downloads.

TikTok was the most downloaded application worldwide in March 2020 with over 115.2 million downloads, which represented an increase of 98.4% compared to March 2019 (Sensor Tower, 2020). The countries with the most application installations during this period were India, with 29.5% of its total downloads, and Brazil with 9.4%.