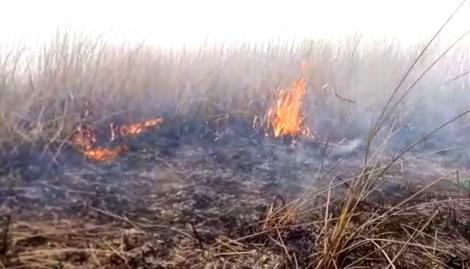 The fire in the islands of the Paraná River Delta is advancing. From Granadero Baigorria, in Santa Fe, to Baradero, in the province of Buenos Aires, cities are witnesses to the flames and smoke that makes the air unbreathable. This Friday the fire reached San Nicolás. “I am puzzled by the number of outbreaks there are,” said the journalist from the scene. TN José Bianco.

“Yesterday we were until one in the morning and it is a matter of moving among the fires. In the middle of the night they continue, never go out “, Bianco said.

He explained that this happens because “mechanisms in the atmosphere” are generated they fuel fires and cause “smoke to travel hundreds of kilometers.” “I am puzzled by the number of outbreaks there are. There is fire everywhere,” he said.

As he specified, the north wind will continue in the coming days and is one of the indicators taken into account by the teams that are trying to put out the fire. By knowing the weather conditions, they can also know which cities will be affected by the fires.

“Yesterday the conditions were favorable for the fire to go out, the flames reached our waist,” said Bianco. “The locals said to us: ‘Why are you going to come to turn it off and spend resources, if tomorrow another comes and turns it on again?'” He said in relation to the dispute between locals and producers, who suspect that they started the fire.

Meanwhile, a crew of 45 troops from the special group of the Argentine Naval Prefecture, the Albatros, arrived in Rosario on Thursday to join the fight against the fires.

The troops will carry out prevention tasks in collaboration with the National Fire Management Plan by order of the Ministry of Security. Also, will seek to identify people that could have caused fires to provide evidence to the Federal Justice

“There are three helicopters, hydrant planes and a significant number of brigade members from different places,” said the mayor. Sergio Claro. The Albatros brigades have the technology to operate by land, air and river to “gain access through the channels present on the islands and reach the greatest depth on the ground,” he said.

As work continues to contain the fires, this week Victoria’s state attorney charged and requested the arrest of ten lot owners in which intentional burns occurred in the Paraná Delta.