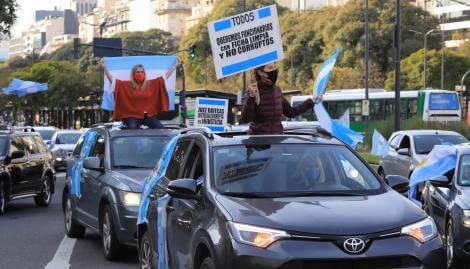 After the saucepan after Alberto Fernández’s presentation of the judicial reform project in the Casa Rosada, on the afternoon of this Saturday hundreds of people gathered at the Buenos Aires Obelisk to demonstrate against of the initiative of the Executive, that raises changes in the number and operation of the Supreme Court of Justice.

The call, which began to circulate through social networks with the slogan “# 1ASalimosTodos. No to judicial reform”, started at 16 in downtown Buenos Aires. Although also, it had its aftershocks at other points, as Olivos, Córdoba, and Bariloche, where attendees raised Argentine flags and signs saying “Let’s say no to Judicial Reform” and “No to impunity” .

Despite the restrictions imposed by the quarantine, a large number of people decided to leave their homes to claim against the project. Whether on foot, by car, with pans and honks, the protesters expressed their discontent.

“We want justice in favor of the people, not politics “, expressed a woman in dialogue with TN. While another commented: “I came to demonstrate because a corrupt country cannot grow. I am sorry that we cannot live in a democracy and are subject to corrupt politicians.” “We are losing the nation, the country. They are going to wear us. We have to wake up and defend this beautiful country,” added a third.

From Olivos, another of the epicenters of the protests, a protester said: “What they want to do is run over, they want to raffle and sell the country.”

The deputy for Together for Change, Fernando Iglesias, was also present at the march and published photos on his social networks. “Against justice reform and the impunity plan“he wrote on his Twitter account.

On Wednesday, President Alberto Fernández led the presentation of the Justice reform project and the possible expansion of the Court. After the announcement, the main leaders of Together for Change harshly questioned the government’s initiative and pointed to the current vice president as the main promoter of the project.

The central arguments to reject the possible expansion of the Court point to the inclusion in the advisory commission of Carlos Beraldi, one of the defense lawyers of Vice President Cristina Kirchner.

“The objective is clear: to create one more instance in the federal criminal justice system, to continue prolonging cases, to issue annulments, dismissals, or any other judicial resolution that guarantee impunity. Some of the experts summoned are clear on how to design the new composition, operation and future procedures before the Court that guarantee this objective, “they said.

Saturday weather: sunny and spring in the City

how do companies go about quarantine

Sahara dust could increase mortality of people with diseases such as...