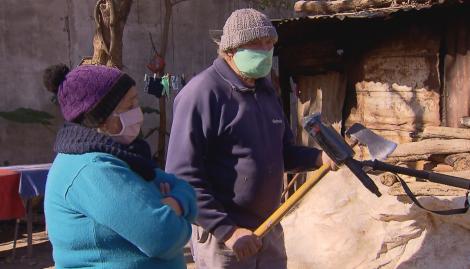 This scene has been repeated every day for decades. Her name is Ramona and she is 63 years old. His partner is Nestor, everyone knows him as “Russian” and he has 69. They have 18 children and 50 grandchildren, many of whom live with them in a humble house in Zárate, Buenos Aires province. They don’t have gas, that’s why, from time immemorial, they have climbed an old Citroen to travel several kilometers until they reach the mountain. There they get the firewood to heat water and heat your home. They are used to doing it but the effort is great and their hands do not give more.

So they told it to Daniel Malnatti in the section “You’re not alone” for Telenoche. With them he traveled inland to reconstruct the daily odyssey that includes a journey of between 15 kilometers and 25 kilometers to cut wood with an old ax and return home three or four hours later.

In the middle of the road, the car can break several times and get very tired but nothing intimidates them. They go on and on. It is what they know how to do. With the firewood they can from showering to melting the fat they sell at a neighborhood bakery to add a few pesos to their pockets.

“We always fight a lot”, puts into words his reality the “Russian” with a smile and without victimizing himself. “We need a chainsaw to cut firewood easier,” he adds, admitting that osteoarthritis reached his hands and that the effort with the ax is enormous. Life sacrificed in sight, they offer firewood to whoever can donate the chainsaw.

At the close of Telenoche, many viewers called to the WhatsApp of the program to help them. There are chainsaw and other donations on the horizon. In short, great little gestures that, as in other stories spread in “You’re not alone”, they can change lives.

Charly García will release a new album after 4 years /...

Maturities of concern to taxpayers in quarantine

her ex-partner murdered her with 10 stab wounds / Argentina News

Mercado Libre bought Lagash, which will support the team led from...

SMEs can now apply for investment loans at subsidized rates

Business and coronavirus: are we really facing a “black swan”?

A Buenos Aires police officer who was investigating the drug “Verdura”...

The reason why Aislinn Derbez reappeared on Instagram with some bikini...

The controversy over releases, on the covers of the country’s newspapers