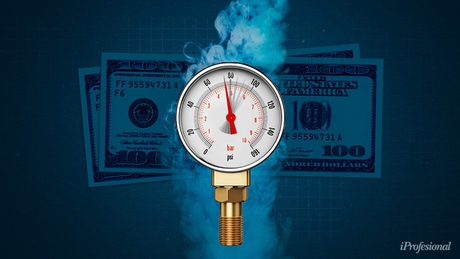 Despite the fact that there is great uncertainty regarding the resolution of the debt, the market is already making its predictions. The details

The price of retail dollar at the official level it closed this Friday at an average of $ 76.38, with an increase of 11 cents compared to the previous day, which represented throughout the month an advance of $ 2.31, equivalent to an increase of 3.12% in the month. In this way, the “solidarity” dollar (official + 30% tax), has already exceeded by far $ 99 and everything seems to indicate that it will soon touch the emblematic mark of $ 100.

For its part, the so-called informal dollar or “blue“ it was negotiated with an increase of one peso, on an average of $ 136 per unit. And analysts already anticipate that it will continue its course of escalations during August.

Dollar: the solidary quote is moving smoothly – but without pause – towards the $ 100 mark.

What will happen to the price of the blue dollar

Mauro Mazza, Head of Research at Bull Market BrokersHe said that with increases of the order of 20%, the financial dollars “are trying to converge again with the blue dollar, which went from $ 122 to $ 137 in the month.”

The specialist estimated that in August the informal dollar will be worth between $ 150 and $ 155, and a CCL and MEP at $ 117 and $ 120, since it expects “very aggressive regulations and resolutions affecting prices”.

“Second-hand corn is finished and seasonally August is usually bad for the sale of flour and oil. Later, until the second half of December, the market runs out of agricultural supplies,” he said.

For his part, Christian Buteler, financial analyst, noted that During the month, the BCRA continued with its strategy of daily mini-assessments in the wholesale segment, which impact “every two or three days in the retail sector”.

On the side of the CCL and the MEP, he specified that the increase they showed in July was due to the fact that investors adapted to the new regulations imposed on the currency market and “like a spring they returned to their current value.”

The forecasts are bullish for the price of the blue dollar.

The dollar, again under pressure

Finally, Buteler highlighted that the Dolar blue It had several “quiet” weeks until the monetary entity began to lock the transfers in dollars from the “digital collectors”, and this caused that there was less supply of dollars in the city, “naturally impacting on the price”.

“For August, the trend is bullish for all dollar quotes. The increase will depend on the speed of the money issue“he concluded.

During the day, the volume operated in the cash segment was US $ 194 million and US $ 140 million were recorded in the futures sector of the MAE.