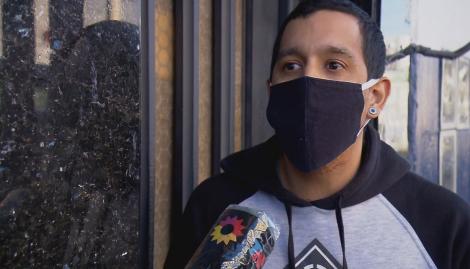 Matías is the brother-in-law of Luciano Rodríguez, the driver who chased a motorbike that had stolen his cell phone at high speed and ended up colliding and killing another driver in Gerli. The man spoke to Catalina Bonadeo in Telenoche and he was lapidary: far from defending the husband of his sister Erica, he charged against him: “What she did was an unconsciousness. She could have been killed or killed.”.

Along the same lines, he expressed solidarity with the family of Mauro Varela, the 37-year-old motorist who tragically crossed Luciano’s road and ended up dead. “There is no consolation for them. I do not know if my words can be of much use to him, “Matías added, expressing sorrow for his sister and his 11-year-old nephew. He also stressed that he does not agree with those who” do justice by their own hands. ” “In this case someone who had nothing to do died”, stressed.

Matías also said that his sister is very shocked and psychologically ill, that she did not return home and that little by little they told her nephew what happened. Both Luciano and Erica, the two occupants of the car in question were injured but are recovering. At the close of this note, Luciano was declaring. Erica is not charged. He appears in the case as a witness.

The march of # 17A: massive flagging across the country against...

Demand for video calls continues to rise, say Microsoft and others

Motorhome: a business and three new customers that germinated in a...

two Americans sentenced to 20 years in prison after failed operation...

Alberto Fernández completes details of the extension of the quarantine with...

the ideal dinner for a RAIN day / Argentina News

What rights must be guaranteed at the time of delivery

Airlines: collapse of reservations and more cancellations in analysis