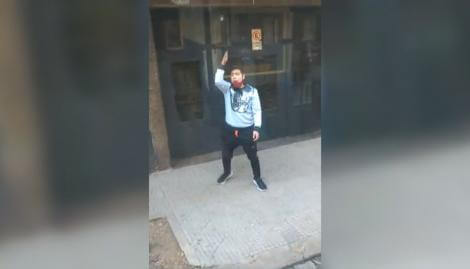 Quarantine in these times shows a landscape of semi-empty buses. However, above the units there are still outbursts. This Wednesday afternoon it was up to Luisdriver of the line 95. And decided to confront the thieves. Everything happened in Pasco and Independencia, in the Buenos Aires neighborhood of San Cristóbal. The images were recorded by a passenger, who approached them to TN.

“This is something that happens every day. This time I got angry because a passenger came up, then an older person and one of these individuals behind. And when he went up, they were reaching into this man’s pocket. He, poor thing, didn’t notice. I noticed and closed the door for him. There he says ‘stop, stop, here comes my partner’. I told him to get off. And then they started to insult me ​​and throw everything, as seen in the video, “said the driver.

The images show that Luis got down to confront them and the thieves backed away. Then the driver got in, but did not start. Then the snatchers returned to the charge and the tension increased: They started throwing rocks and garbage cans into the vehicle, while Luis yelled at them: “Pungas! Go to work!”. The criminals remained defiant and invited him to fight. The passengers intervened to ask the driver to start the bus.

“Half a block away, the former vice president (Gabriela) Michetti lives and there are always police officers. I looked for someone, but I didn’t find anyone,” said the driver.

According to Luis, outbursts are frequent in times of quarantine. “We already know these guys. And they don’t have a schedule. They go up at any time and snatch cell phones, mainly. They already have a diagrammed route: from the Borda hospital to Independencia avenue “, denounced and added: “They appear two by three, three by four. But they are always the same people”.

According to his version, the thieves act organized and attack, in a row, one after another, all the collectives on line 95. “We are tired. I realized it because a colleague had warned me that they were coming to rob a passenger five minutes before. And two cars behind me robbed another passenger, “he stressed. And ended: “They get the ticket accordingly and everything. They watch, carpetean. When they go to ring the bell that is distracted they snatch it and run away. “

The “babysitter” cat that swings a child to take a nap

Creative Quarantine: Replaced scenes from famous movies with photos of his...

July 9: Flag shot across the country “in defense of freedoms”

The baby the doctors sent to the psychologist died of infectious...

Spain, on alert for COVID-19, with the first city confined by...

Vicentin effect: punishment continues for ADRs, which subtract up to 6%...

Marco Materazzi recounted what the real comment was that triggered Zinedine...