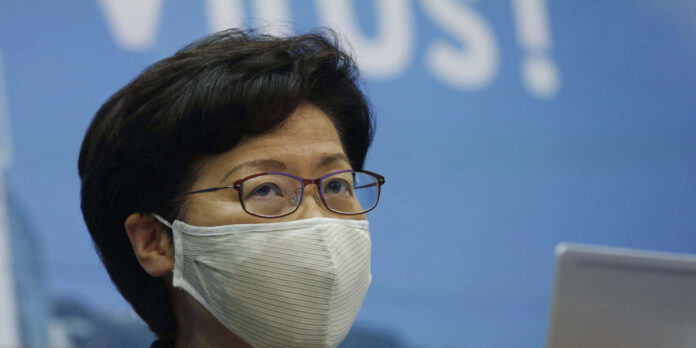 Hong Kong executive leader Carrie Lam announced Friday (July 31) the postponement of parliamentary elections scheduled for September due to the rise in coronavirus cases. This decision risks fueling the anger of the pro-democracy camp. “Today I am announcing the most difficult decision of the past seven months (…) which is to postpone the elections to the Legislative Council ”, she said in reference to LegCo, the city’s parliament.

Such a postponement risks undermining the hopes of the Democratic opposition to achieve an unprecedented victory after the introduction, at Beijing’s initiative, of a national security law accused by its critics of undermining the freedoms of residents.

Read also “The End of Hong Kong as the World Known It”: Update on Beijing-Imposed National Security Law

After its large victory in the elections organized at the level of the districts of the city at the end of last year, the opposition hopes to maintain the momentum created by the vast protest movement against the local executive and the Chinese power in 2019. The Legislative Council of Hong Kong is elected half by direct suffrage and the other half by indirect suffrage favoring personalities favorable to China.

Rejection of the candidacy of twelve opposition candidates

Since the introduction of the National Security Law at the end of June, intended to combat what China describes as subversion, secession, terrorism and collusion with foreign forces, pressure has intensified on defenders of democracy in Hong Kong. .

Twelve opposition candidates, including the young activist Joshua Wong but also more established and more moderate personalities, saw their candidacy rejected Thursday on the grounds, according to the local executive, of their subversive intentions linked to their hostility to the law on national security. The government denies any censorship or infringement of the right to apply.

Hong Kong has recorded more than 3,000 cases of contamination with the new coronavirus since January, with a daily record of 149 new infections reported on Thursday.

how many hours do you sleep and how long are you...

With a digital profile, Banco del Sol was born: what is...

what is it and why / Argentina News

Warren Buffett company sells all its shares in US airlines

Proaco started selling garages in Pocito and is now preparing a...

this is how ECOMMERCE will change this year / Argentina News

the brand that Boca has / Argentina News