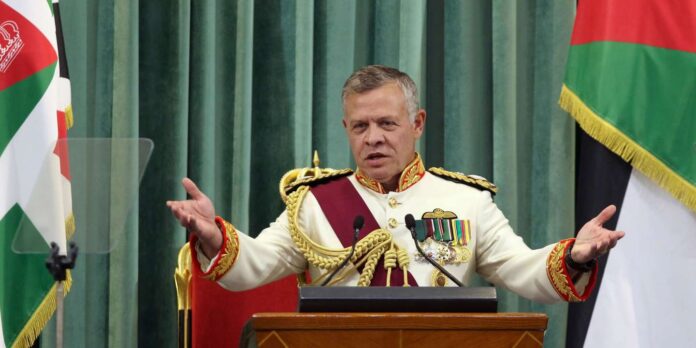 The political climate is hardening in Jordan. On Wednesday, July 29, a demonstration by several hundred teachers protesting in central Amman against the closure of their union, the only truly independent professional organization in the country, was brutally dispersed by riot police. Dozens of teachers were arrested and a journalist filming the scene was clubbed.

The events come ten days after a court ruling restricting the room for maneuver of the Muslim Brotherhood, the main opposition movement against the Hashemite crown. In the past two years, activists criticizing the government’s austerity measures, grappling with soaring debt, have also been jailed. “We are witnessing a shift towards a more repressive political order”, worries Adam Coogle of Human Rights Watch. A drift that gradually breaks with the Jordanian tradition of moderate authoritarianism.

Article reserved for our subscribers Read also The Kingdom of Jordan, a fragile barrier to Trump’s “peace plan”

The teachers’ union, founded in 2011, in the midst of the “Arab Spring”, in the wake of the demonstrations that had shaken Jordan at the time, was closed on Saturday July 25 in an expeditious manner: by a police raid on its headquarters in Amman and in the premises of its eleven branches across the country. The thirteen members of its board have been jailed on alleged “financial crimes”. Everything suggests, however, that the offensive against this organization was the result of political considerations.

Battle won against the government

In the fall of 2019, with 100,000 members, the union had led and won an unprecedented battle against the government. After a month’s strike, a rare example of a successful social movement in the Middle East, the professors were promised a substantial increase in their salaries, between 35% and 75%, depending on merit and length of service. A revaluation necessary for a profession little considered and very poorly paid. But, in April, due to the economic crisis caused by the Covid-19 pandemic, authorities froze all public sector wage increases.

This unilateral decision angered the union, which in recent days had raised the threat of a resumption of the strike in September. The prospect of a new social conflict, on top of the health crisis and the economic difficulties of the kingdom – a country without resources which lives on infusions from its Arab and Western allies – prompted the authorities to crack down. In addition to shutting down the union for two years, authorities banned local media from covering protests by its members.

You have 24.1% of this article to read. The rest is for subscribers only.

What do Argentines prefer to stop paying ?: debt ranking

What is the ceiling for double compensation? / Argentina News

Monday weather: probability of storms in the City of Buenos Aires

MICROSOFT TEAMS: how it works and how to take advantage of...