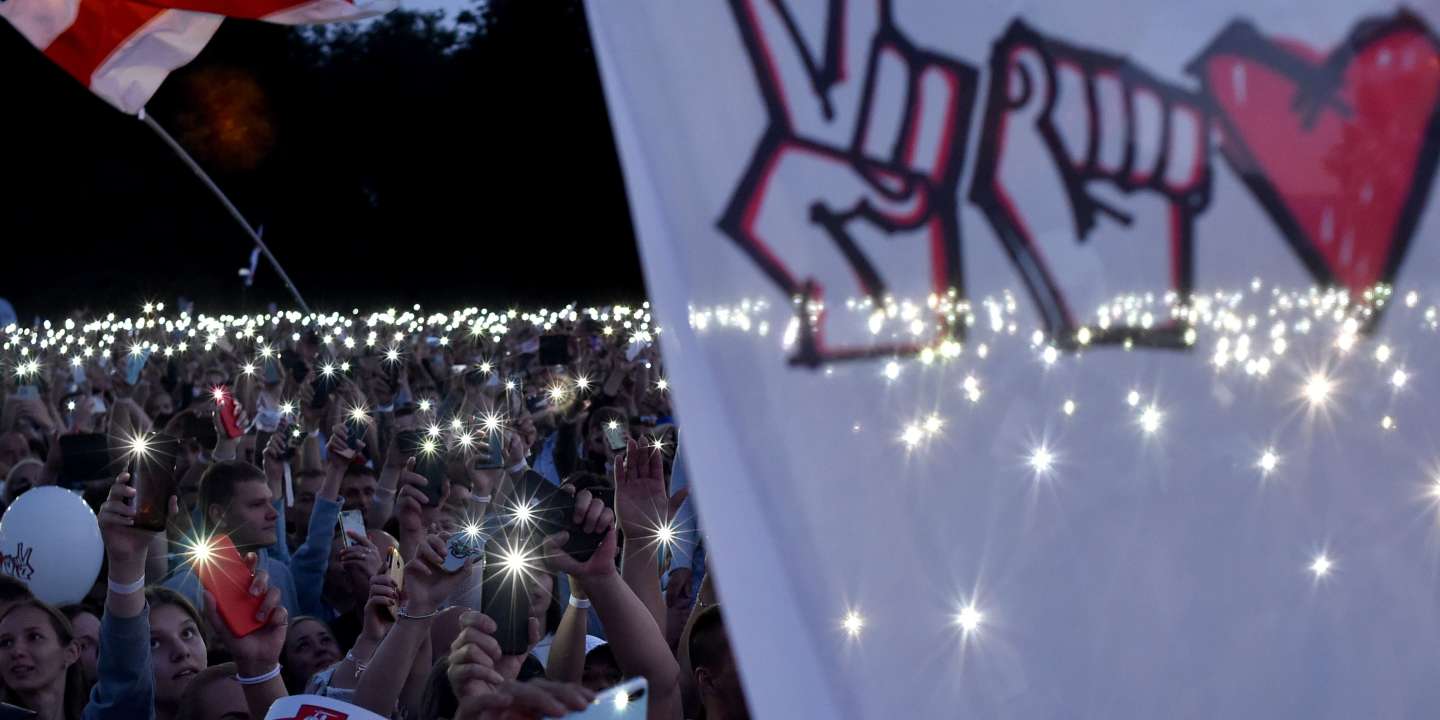 Tens of thousands of supporters of the main opposition candidate in the Belarusian presidential election took part in a large rally on Thursday (July 30th), despite pressure from the authorities who accuse jailed opponents of wanting to organize “Riots” with the help of Russian paramilitaries.

At least 63,000 people, according to human rights organization Vasnia, gathered in a park in the capital Minsk in support of this unexpected candidate, Svetlana Tikhanovskaya, for the biggest rally of opponents in at least a decade in Belarus .

Read also In Belarus, the opposition unites against Alexander Lukashenko

Earlier today, authorities charged two incarcerated opposition leaders, Sergei Tikhanovsky, husband of Mr.me Tikhanovskaya, and Mikola Statkevich, for seeking to organize “Mass riots” ahead of the August 9 poll with the help of a private military company believed to be close to the Kremlin, Wagner.

This accusation is a new twist in an eventful electoral campaign, marked by a violent repression targeting demonstrators and opponents. Despite this, the election promises to be thorny for President Alexander Lukashenko, in power since 1994 and facing unusually strong mobilization from the opposition.

On Wednesday, security forces arrested 33 Russians presented as “Fighters” of Wagner seeking to “Destabilize” Belarus. These allegations provoked bitter exchanges with Moscow. Historical allies, Russia and Belarus have maintained strained relations since the end of 2019, with Alexander Lukashenko accusing Russia of wanting to reduce his country to the state of vassal and of meddling in the August 9 ballot, which Moscow denies.

Speaking to her supporters, Svetlana Tikhanovskaya, meanwhile, accused the authorities of ” to break “ the life of her husband and “Other political prisoners” Belarusians, adding that the arrest of the Russian paramilitaries was “Scary”. “No one will believe that these fighters were sent to us for the elections. That they wanted to make a revolution here. What revolution? We want freedom ”, she added.

According to Andrei Ravkov, Secretary of State of the Belarusian Security Council, the 33 men arrested on Wednesday belong to a group of 200 people: “We look for the others, they are like a needle in a haystack. “

Russia has denied any attempt at destabilization. “It is obvious that this cannot be the case, Russia and Belarus are allies, the closest partners”, reacted Dmitry Peskov, the spokesman of the Kremlin. In a statement, Russian diplomacy said the men worked for a Belarusian company and were in transit to Istanbul. “Any attempt to portray what happened as outside interference in the affairs of the republic [biélorusse] is astonishing to say the least ”, can we read there.

Wagner is regularly accused of deploying mercenaries abroad – Ukraine, Syria, Libya, Central African Republic – interventions with which Russia does not want to be officially associated.

Belarusian authorities say suspects should destabilize the country during the presidential election, Lukashenko, 65, arguing that Russia, his main ally for 26 years, is now backing his opponents.

After replacing her husband at a moment’s notice in the presidential race, Svetalana Tikhanovskaya has unexpectedly become a political phenomenon, whose rallies draw crowds never seen before in Belarus.

She teamed up with Maria Kolesnikova, the former campaign manager of another jailed opponent, and Veronika Tsepkalo, the wife of a third regime critic now in exile in Russia. The latter announced on Thursday the arrest of her sister and her summons by the police in an investigation against her husband, “Political pressures”, according to her.

President Lukashenko has never looked so contested since coming to power in 1994 as during this election campaign, galvanized by the arrival of new faces. If he has accused the West on numerous occasions of wanting to dismiss him in the past, this is the first time he has attacked Russia in this way and some consider that the case is a staging orchestrated by the Belarusian authorities. MM. Lukashenko and Putin have seen each other several times in recent months, including twice in June, in an unsuccessful attempt to resolve their differences.