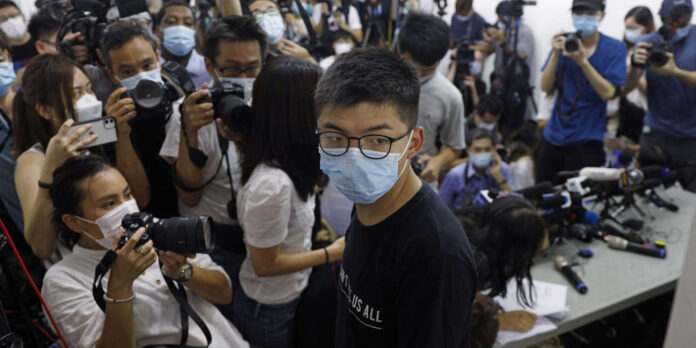 Before Carrie Lam, Hong Kong’s chief executive, announced Friday (July 31) the postponement of parliamentary elections scheduled for September 6, a dozen prominent opposition figures had learned the day before that their candidacy was inadmissible. ” This is a purely political decision disguised in nonexistent legal verbiage “, angrily said Thursday afternoon Dennis Kwok, 42, one of the opposition’s most respected and eloquent MPs, barred from running for a third term for the Civic Party, the lawyers’ party.

The reasons for which twelve candidates of the pro-democracy camp were eliminated are very varied. Some, the inspectors of the electoral procedure criticized their statements on the recent draconian national security law imposed by Beijing a month earlier, aimed at punishing any form of criticism of the central government. To others, they pointed out their contacts with foreign governments, because some deputies or activists went to Washington to ask for the support of the United States, or in Europe to warn about the progressive strangling of fundamental freedoms or on abuses of the police. In yet other cases, examiners have simply ruled that candidates’ declaration of allegiance to the local constitution, Basic Law, “Lacked sincerity”.

The weakness of the explanations provided seems to indicate that the officials responsible for validating the candidacies were overzealous. ” Beijing wanted to avoid a hostile takeover of Parliament ”, said Lau Siu-kai, vice-president of the Chinese Association for Hong Kong and Macao Studies, for whom there is no doubt that the central government controlled the “sweep” operation.

Faced with repression, the pro-democracy camp had succeeded in mobilizing 600,000 citizens during the first large-scale primaries, organized on July 12. Beijing has every reason to fear that the anger of Hong Kongers will be heard at the ballot box, even if the electoral system is already very strongly biased in its favor, by partial representation by economic sectors, loyal to Chinese power. By delaying the vote, China is giving itself time to lock the ballot even further, relying on its new law, as the ongoing disqualifications show.

Their announcement drew international condemnation. The last British governor of Hong Kong until the 1997 handover, Chris Patten, called the elimination of opposition candidates “Scandalous political purge”, considering that a “Such behavior was expected of a police state”.

You have 56.87% of this article to read. The rest is for subscribers only.

What should be Germany’s role in the world? | Germany | News and in-depth reporting from Berlin and beyond | ...

Stockbroker tells how he finds great therapy in the kitchen

The barrel of oil registers losses in New York and London

Fires in Córdoba: the rain brought relief and extinguished all active...

“Turn off the camera because I turn it down”: hooded men...

Boca, one step away from announcing its first reinforcement

Tucumán enabled temporary shelters: how is the protocol