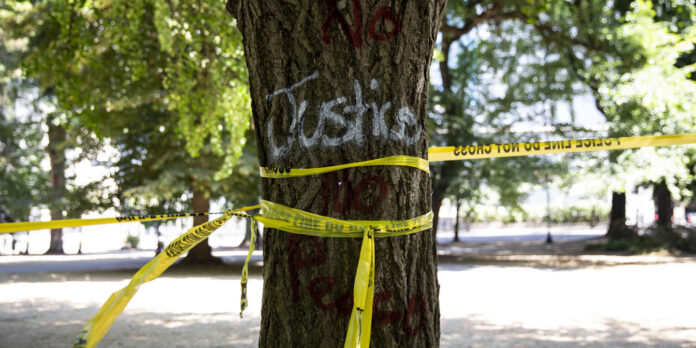 MORIAH RATNER FOR “THE WORLD”

ReportageWashington’s dispatch of federal troops had made the city of Oregon the epicenter of the revolt that has shaken the United States since the death of George Floyd. After the announced withdrawal of the “feds”, the movement questions its future.

It is too early to say, after the battle that was played out in Portland, Ore. In July, whether there will be a winner. But there is at least one certainty: there is a loser, and his name is Donald Trump. On Thursday, July 30, federal officers that the US president had deployed unilaterally to protect official buildings withdrew to make way for local police. And whoever wanted to prove in the city that he was the president of ” Law and order “ emerged as the vector of arbitrariness and chaos.

For the past fortnight, the epicenter of the revolt that has agitated the United States since the death of George Floyd, an African-American, during his arrest on May 25, in Minneapolis, has moved to the city of the West Coast. . Not a day without Donald Trump castigating the city, “A hive of terrorists”, its elected officials, “Incompetent”, and its demonstrators, “Anarchists who hate our country”. Not a day goes by without pro-Trump presenters on the conservative Fox News channel presenting it as hot and blood, or Democrats outraged by the presence of federal troops.

Everything came to an end on Wednesday, with Democratic Governor Kate Brown’s announcement on Twitter: “The federal government has accepted my request and will begin to withdraw its agents” the next day to make way for the Oregon State Police. The reverse is clear for Washington, whose partial denials cause confusion. “The state of Oregon has finally agreed to cooperate with our federal forces, exactly what we have been asking for since the violence erupted two months ago. We are happy that Oregon is correcting its mistakes “, replies on Twitter the acting Homeland Security Secretary of Donald Trump, Chad Wolf, assuring that the federal police officers would remain “Until we see the plan work”.

How did Portland, 1,500 km from Minneapolis, become the focal point of the protest movement six weeks after the death of George Floyd? The city is certainly one of the whitest in the United States (72%), with only 6% of black residents: Oregon has long been the only American state prohibiting them from residing on its territory, and bears a long history of uninhibited racism. But she is also a student and worker, a protestor and sometimes a schoolboy.

You have 78.44% of this article to read. The rest is for subscribers only.

Ousmane Kaba, the first opposition candidate to join the race

The delivery of cars started, but the dealers ask for delivery...

the product hardest hit by the crisis

An airline will give 100,000 free tickets to health personnel

Exports and co-production, two engines for the Cordoba audiovisual industry

Shops, transport and walks: all the measures for the AMBA in...