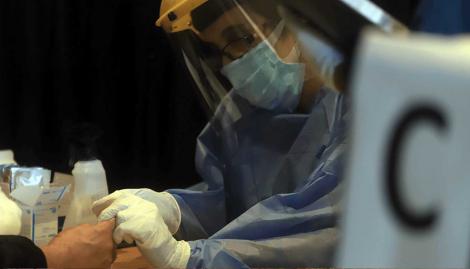 The Buenos Aires Government launched in July a seroprevalence study, through IgG serological tests, to determine what percentage of the population has coronavirus antibodies. However, several neighbors feel insecure and report that criminals take advantage of this action to steal. How to make verify the identity of staff in charge of the action.

Sources from the General Directorate of Statistics and Census (DGEyC) of the City of Buenos Aires explained to TN.com.ar that this study is taking place in all the communes and that will finish in 10 days. They will repeat it in August and September in order to achieve better traceability of the path of the disease in the jurisdiction.

How is the test and who goes to each house

Between the last two weeks of July and the first week of August, from Monday to Friday, from 10 a.m. to 5 p.m., health personnel of the City Government will be presented at home of the selected people who must have previously received a notification. The test consists of draw a drop of blood from the finger to a single resident of that household, who must be 18 years or older. In addition, you will be given a brief questionnaire related to your health.

“They are working a nurse and a sensitizer, who is the person who opens the interview and accompanies the study, “the sources detailed. In addition, they said that both workers are dressed in camisoles, chinstrap, latex gloves, among other protection elements and that have a DGEyC credential.

From this area of ​​the Buenos Aires Ministry of Finance, they recognized that it is necessary for the worker to enter the home, since “it must have a table to support the instruments to do the test and disinfect the finger that will be pricked.”

The results of the test are known within the five subsequent days to the study and they will be informed to the neighbor. If positive, you are invited to have a nasopharyngeal swab to find out if the virus is active.

This is the same study that was carried out from April at the Once, Constitución and Retiro train stations. And that was also done in the Neighborhood 31where he threw that the 53% of those tested had antibodies for coronavirus.

After six weeks of the contagion curve in Barrio 31, we did a study with IgG serological tests, to measure the number of people with coronavirus antibodies, which showed that 53% of residents developed the disease.

Until now, 600 neighbors have already been tested for this seroprevalence study. The Statistics and Census Directorate recognized that, despite the fact that there are 2000 selected homes, the study will not be carried out in all of them, since there are people who refused and other homes where no one lived.

“Despite the fact that the survey is voluntary, we have a moral obligation to do it, since each house represents a thousand and it is very important to be able to assess the evolution of the virus in the City,” acknowledged the Buenos Aires government source.

It is important to note that this test corresponds only to the City of Buenos Aires. Since in the last week, audios on social networks transpired with complaints from residents of the North zone of Greater Buenos Aires who claimed that they had thrown a letter with this information under the door. The same was detected in the cities of Córdoba, Mendoza and Mar del Plata.

How do I know if my house was selected

Before each visit, the neighbors they should receive a letter informing them that their home was chosen to carry out the study. In the event that your phone is registered in the Buenos Aires Government database, they will receive a call to warn them of this situation. It is the same methodology that is used to make the Annual Household Survey.

The letter, to which he agreed TN.com.ar, explains the days and times when Buenos Aires Health personnel should visit the home to perform the antibody test. In addition, it provides study details and contact details.

In relation to the calls, which were made by the Buenos Aires Secretariat of Communication, the message said: “We are calling you because within the framework of a seroprevalence study being carried out by the City, personnel from the Ministry of Health and the General Directorate of Statistics and Censuses will be attending your home to assess your situation and perform a quick test to determine the presence of antibodies against COVID-19 “. And it explained the same in relation to the days and hours that the staff would attend.

Step by step: how to verify the identity of the staff

From the General Directorate of Statistics and censuses, belonging to the Buenos Aires Ministry of Finance and Finance, they explained to TN.com.ar the form to verify the identity of the person who comes to test and see his photograph before letting him enter the home.

Step 2: click on the banner that says “COVID-19 seroprevalence survey“

Step 3: do scroll down to where it says, “You can verify the identity of your interviewer entering here. “And click on the hyperlink (which appears in blue).

Step 4: a screen will open where the user can enter ID, name, surname or operating number of the person trying to enter the address. With any of these data, the system will send the contact information and a photo.

From the DGEYC they explained to this medium that there are two ways of get this data. The first is contact the offices, at 4032-9147 / 4032-9145, and leave your phone so that the person in charge of the sampling communicates and provides you with the nurse’s personal information.

The second, in case the person rings the bell, is check your ID before you enter at home and verify your identity. Although it can be cumbersome to have to do this with the pollsters at the door, it is necessary to do so to avoid falling victim to an “uncle’s tale.”

As an additional measure, the staff has a DGEYC credential, valid until August 7, which must also show if the neighbor asks for it.