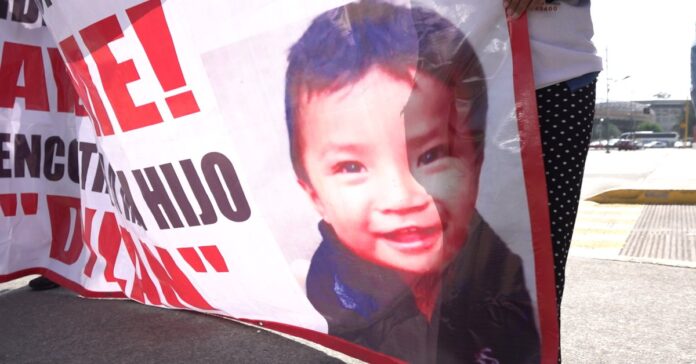 It has already happened a month since little Dylan disappeared, two years and 8 months old, in the Mercado Popular del Sur (Merposur) of San Cristóbal de las Casas, in the southern state of Chiapas. And so far his mother, Juana Pérez (23), no progress in the investigation has been reported.

She was in Mexico City, on July 21 and 22, to try to talk to President Andrés Manuel López Obrador, to present his case and beg her for support in finding her son. López Obrador did not receive it. But he did send him to say that he was already in contact with the Chiapas authorities and that there was already progress on the search for Dylan. They would let them know upon his return to Chiapas, where he already had an appointment scheduled with the state attorney, Jorge Llaven. But he did not come. And of the supposed advances Juanita knew nothing.

Of course, while Dylan’s mother was in the Mexican capital, the Chiapas prosecutor’s office reported that there was already a woman located as the person responsible for the boy’s disappearance. It was a certain Ophelia ‘N’. For his whereabouts, the state agency offered a reward of up to 300,000 pesos (about $ 15,000).

The aforementioned woman was linked to the alleged child trafficking network that the prosecution had dismantled – during investigations into Dylan’s whereabouts, as reported on July 20 – in the Tlaxcala neighborhood, also in San Cristóbal de las Casas. In that event they had “rescued” 23 minors – Dylan was not among them – and detained five adults. The relationship they established with Ofelia ‘N’ was that she was the sister of one of the detained women.

Key includes even pointed out that it was an entire family dedicated to exploiting minors –Supposedly violating them and forcing them to work selling handicrafts–, and that they would be behind Dylan’s disappearance. “This investigation is leading to a network of traffickers, it is a complete family of sisters, so we are talking about a network, a family network of child traffickers ”, He then said in one of his statements about the case.

The alleged trafficking ring is actually a Tzotzil family

The people mentioned came out to give their version; it did not coincide at all with what the prosecutor said. And so, practically, the assembly that the prosecution would have made fell.

All the people who lived in the searched house, where the authorities made the arrests, are originally from Chictón, a community in the municipality of Ixtapa that is about an hour and 20 minutes from San Cristóbal de las Casas. There they rented a house and daily the whole family went out to sell handicrafts, a common practice among indigenous citizens of those areas.

Jennifer Haza, director of Melel Xojobal, A.C. –An association that is dedicated to the protection of the rights of indigenous children and youth–, who has accompanied these people throughout the process since they were arrested, he explained to Infobae Mexico that, according to the victims, It all started with the statements of seven police officers – who have not appeared in public – who denounced that it was a family dedicated to child exploitation. And it is that the elements allegedly alleged that they saw the grandfather of the minors climb into a public transport unit with a boy who looked like Dylan.

On July 15, while working on public roads, Adolfo Gómez (57) was arrested – practically with deceit. Josefa Sánchez, his wife, went that same day to get him out of prison; They also arrested her. They are the grandparents of the girls and boys supposedly rescued. Two days later, on July 17, the police searched their home and arrested two of their daughters (María Hortensia and Maribel) and a daughter-in-law (Juana Montejo), in addition to taking the 23 minors.

“What the prosecutor said is that the policemen who are investigating, while they were in the process of searching for Dylan, they realize that there are girls and boys who are being exploited. Then they identify the address and do the search. So … for us it does not make any senseHaza detailed.

“According to the complaints collected there were arbitrary arrests“He insisted, interviewed by Infobae, Juan Martín Pérez, director of the Network for Children’s Rights in Mexico (REDIM). “It is a recurring practice in all the authorities of the country: discrimination against indigenous communities. When they need to hit the media it is a widely used resource, because particularly these peoples have less possibilities of litigating and defending themselves ”, he warned.

Meanwhile, relatives of the children separated from their home went to the DIF facilities with birth certificates for at least five of them. Yet and with that they were not given. Three of those minors recognized them as their relatives. That was not enough either.

”The prosecution have no no judicial support, to date, to maintain that there is a crime of trafficking; to keep detainees in prison; and there are no legal justifications for the separation of minors from their families.“Explained the leader of the Melel association.

He also specified that of the 23 children who were taken from the searched house, 20 are in the DIF facilities and the remaining three with their mothers in (the prison) El Amate, since they are infants.

While Juan Martín of REDIM recalled that, for the prosecution to act as it did, it had to have at least three crucial elements: Amber alerts of minors or reports of their disappearance; have documented evidence of the reported forced labor; and the certainty that the accused were not related to the minors. None of this was verified.

In addition, a woman who identified herself, Ofelia, sister of Josefa Sánchez, also appeared before the authorities to distinguish herself from Dylan’s disappearance.

One of the detainees died in prison

Adolfo Gomez, grandfather of the minors and the first of the family to be arrested, He was found dead in his cell on July 27. The prosecution, In the first moment, concluded that the death had been for suicide; that Adolfo had hung himself to kill themselves.

However, when they handed over Adolfo’s body to his relatives, had signs of violence and torture: blood, bruises, even a head injury. For that reason, his family complained to the authorities for having lied on the causes of death.

“Already lThe prosecution recognized that he was killed by strangulation. (…) they recognized that it was murder, while he was in prison under State protection ”, indicated Juan Martín Pérez

While for Jennifer Haza, this is one more example of criminalization of poverty by the State. “No one understands anything. It seems to us that it is one after another violation of human rights. AND this particular prosecutor has a history of torture practices, of arbitrary detention practices And it is the State Attorney General, who is holding this thesis that they have no support or argument. “

Infobae Mexico He has insisted with the Chiapas Prosecutor’s Office to learn more about both issues. As of this writing, there has been no response.

All this portrait is especially serious when taking into account that it is the result of the search for one of the 12,755 children – according to figures from the National Search Commission (CNB) – who are missing in Mexico.

From REDIM they make a call for the Attorney General of the Republic (FGR) to attract the investigation of this entire caseSince the efforts of the Chiapas prosecution “are now defending the image of the governor, the image of the prosecutor, and trying to defend against the obvious errors that this process has.”

And Dylan? … Well, he still doesn’t show up.

Dylan’s disappearance step by step: the day the nightmare began in his mother’s voice

“It happened with this closure of children”: López Obrador assured that there is progress with the Dylan case that uncovered the trafficking network

Like Dylan, more than 7 minors disappear every day in Mexico

Viviana Canosa gave details of her relationship with Alberto Fernández /...

The first rambling meeting of candidate Kanye West for the US...

More than half of the hotels in Cordoba think about closing

The post-quarantine day: do Argentines want to continue with the “home-office”...