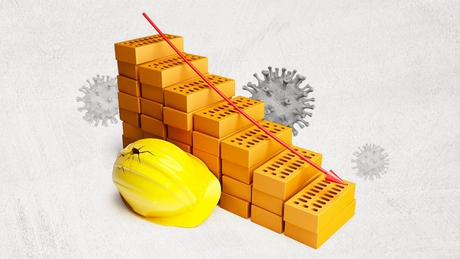 The healthcare scenario, with the consolidation of telework as a prominent aspect, promotes another style of housing. Pesified quotas, a trend

The impact of the pandemic on the activity of the building it is already making itself felt both in terms of new investment possibilities and in the design of the units under development. He collapse of demand, added to the forceful decline exhibited by the value of materials – and the decrease in the cost of the new square meter itself – began to generate “niches” of opportunities in the startups in “boca de pozo” with formulas based more and more on pesified quotas.

Simultaneously, the health protocol established to combat the expansion of Covid-19, added to the change in work routines and the isolation promoted by the authorities in recent months, has been encouraging strong modifications in terms of architecture of newly started or launching departments.

Construction actors consulted by iProfessional indicated that, in dollars, the square meter value brand new is already located up to 15 percent below from last year’s quote. They also indicated that the value of the land fell more than 10 percent in recent times, and that the possibilities of negotiating prices and forms of payment continue to expand.

In this sense, and by virtue of the economic context, trusts in national currency with adjustments tied to the variation in the index of the Argentine Chamber of Construction (CAC) have become predominant in the most recent months. Also, the alternative of investing in square meters of the new development instead of acquiring complete units.

“The expectations are, beyond the vagueness around the return of the activity due to the health issue. We surveyed potential investors and there is enormous interest in the ‘wellhead’ ventures due to the fall in the costs of the works. The expectation is placed on projects that can be activated at the end of the year with a view to 2021 “, he commented to iProfessional Darío López, president of the Central Society of Architects (SCA) and partner in Arquitectónika.

“Due to the need to pull the market, they are presenting themselves unthinkable possibilities in the time before the pandemic. The option to only put ‘cash’ is changing based on the economic context. There is a lot of combination with the possibility of acquire square meters of the new construction, for example. Also, that only dollars be put to cover the land and the rest in installments in pesos, “he added.

According to López, the almost permanent movement that holds the dollar It is the main variable that drives interest in projects that will enter the development phase once the activity is vetoed.

The real estate market, with prices that felt the impact of the rise in the dollar

The swing of the dollar

“The drop shown by the properties is relevant in the area of ​​the used. In the case of the new one the situation is different, we have investors who last year paid the square meter at the rate of $ 2,600 and already in 2020 they negotiated sales with values of the order of 3,100 “, assured.

“For those who have dollars, the advantage in these projects is very clear: they need fewer and fewer bills to cover the established quotas. The value of the construction materials until now it did not show a variation as powerful as the dollar has had. Although there will be changes in the guidelines to resume construction due to sanitary reasons, this aspect will not impact costs in foreign currency, “added the specialist.

In dialogue with iProfessional, José Rozados, CEO of Reporte Inmobiliario, said that after the pandemic “there will be a reaction” around the “wellhead” projects.

“Ventures that are well structured, aligned in terms of new construction costs, will have their call. Interest will be borne by those who have surpluses in terms of savings, also driven by the closure of alternative investment options such as financial, “he said.

“Depending on the context, this movement could take shape before the end of the year. We will probably have a reaction before 2021. We have to see what happens to the health scenario and, of course, how the economy in general reacts, “he said.

Architectural changes by the Covid-19

Facing the reactivation of projects in development, the Central Society of Architects approached iProfessional details of changes in the design of the new units due to the context of the pandemic and the transformation of the home as a place for teleworking.

“Reality now occurs within the department. Now the environments begin to be thought of for the development of multiple activities. Videoconferencing, teleworking, are now dominant and everything indicates that in many cases it is here to stay. In the head of the architects it is beginning to install that the current one is the first of many pandemics that will occur in the future “, they indicated from the organization.

“For example, they started to redesign the balconies to make them wider. Also, the design of the entrance halls in the buildings, to maintain distances. There are cases of projects that incorporate the bicycle instead of having garages, “he added.

López provided comments in this regard. “In a project scheduled for Núñez an atmosphere was added more, closed, so that it works exactly as a bike rider. Materials are also being worked on because the units, from the expansion of teleworking, must improve, for example, acoustics. That annoying noises are not generated or entered. Therefore, they seek alternatives to concrete, make them absorbent, to decrease the bounce of the sound, “he said.

From Real Estate Report, Rozados spoke in a similar tone. “From the pandemic and the isolation there are questions that they are here to stay. Change processes accelerated and concepts such as that of the office with employees gathered at the same time, all together, in the same place, “he said.

To later add: “A revaluation of the own space is being generated, a change regarding the trend of having common spaces, a pool, a gym, in buildings. The change that is taking place has to do with the inclination to a better own space rather than think of sharing in terms of community. “

“The idea of ​​the necessary interior surface in each unit is redefined, the flexibility of the spaces so that a couple or family can carry out activities at home without interference from its members. That the bedroom does not have to be converted into an office. We are also going to an instance of greater incorporation of technologies in common spaces. No need to press buttons, touch as little as possible. In the elevator, in the hallways. All this change will become stronger, “he concluded.