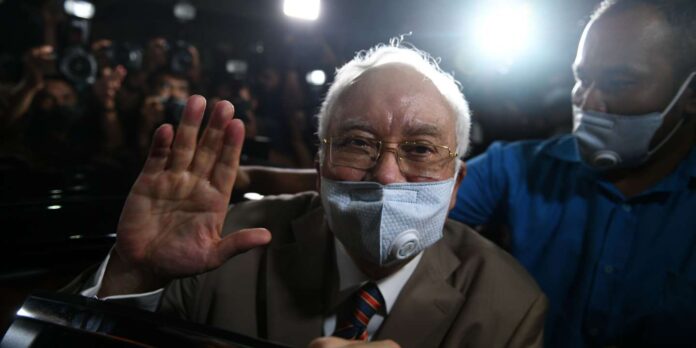 The verdict handed down on Tuesday July 28 by a high court judge in Kuala Lumpur is unprecedented in Malaysian history: former prime minister Najib Razak, ousted from power in the 2018 elections, was sentenced to twelve years jail for corruption, money laundering and abuse of power. He was also ordered to pay a fine of 210 million ringgits (42 million euros). Such a sentence for such a man is a first in a nation whose democratic credit had sagged, precisely during the nine years in power of the “chief kleptocrat”.

The former prime minister was accused on Tuesday of seven counts relating to the embezzlement of 42 million ringgits (8.4 million euros) from a subsidiary of the sovereign fund 1Malaysia Development Berhad (1MDB). This is a scandal with complex and international ramifications in which colossal sums of public money, arguably billions of dollars, have been siphoned off by a number of crooks linked to the “Najib system”. “. The sums concerned relate in particular to the purchase of a yacht, a Picasso painting and the financing of the film The wolf of Wall Street, directed by Martin Scorsese.

For each of the six main charges, the accused faced a ten-year sentence: instead of being added up, they were merged into a single twelve-year sentence. Najib Razak has pleaded not guilty, claiming to have been abused by former affidavits.

The 67-year-old ex-federation strongman established a regime with strong authoritarian tendencies between 2009 and 2018, and his sulphurous “reign” was marred by sordid tales of settling scores and eliminating bothersome witnesses. Educated in the United Kingdom, speaking English with an accent of the British elite, son and nephew of former prime ministers, this star of the establishment was ultimately not spared by a justice whose reputation has not always was that of excessive independence.

Current Prime Minister Muhyiddin Yassin, who was close to “Najib” as everyone in Malaysia calls him, said in a statement that the government “Respected” the court verdict and had “Full confidence” in the justice of his country. After the verdict, opposition leader and tireless putative prime minister Anwar Ibrahim said, “For over a decade, the 1MDB scandal has been a stain on the nation’s reputation and a major source of anger for the Malaysian people.”

You have 53.26% of this article to read. The rest is for subscribers only.

The 10 most outstanding phrases of the President during the isolation...

quotas will remain frozen, according to the government / Argentina News

Coronavirus in Argentina: confirmed 160 deaths and 7,482 infected in the...

Kulfas: April is very likely to remain in history as the...