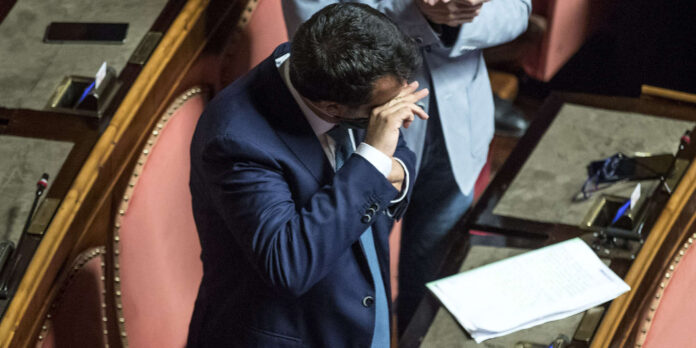 Matteo Salvini, former Italian interior minister, may be summoned to a second trial for having blocked migrants at sea. The Italian Senate voted, Thursday, July 30, to lift the parliamentary immunity of the leader of the League (extreme right), paving the way for his trial in this case involving him when he was in government.

This vote comes in the midst of an upsurge in migrant crossings in the Mediterranean. Hundreds of people disembark every day on the coasts of the Italian islands of Lampedusa and Sicily, aboard small boats, or are rescued at sea by humanitarian ships and coast guards.

Mr. Salvini is accused by the court in Palermo, Sicily, of kidnapping people for refusing in August 2019, in his capacity as Minister of the Interior, to allow the disembarkation of more than 80 migrants on board the humanitarian ship Open-Arms, stranded off Sicily.

The Senate decision represents “An important opportunity to restore the truth of the facts”, reacted Open-Arms. “It is not the former minister that we would like to see judged, but a vision of the world and of politics” opposed to welcoming migrants, the NGO added. With the obstacle of immunity lifted, Matteo Salvini, 47, faces up to 15 years in prison in the case, if the legal proceedings are concluded.

“I’m proud to have defended Italy and I will do it again”, reacted hot Mr. Salvini. “If anyone thinks they’re scaring me with a politically-motivated trial, they’re wrong”, he had launched a little earlier in the House. A Senate committee voted in May against the lifting of immunity in the case, but the Senate, in plenary, had already lifted it in February in another case on which he will be tried on October 3.

In this procedure, he is accused of having blocked in July 2019, for several days, 116 migrants on board the Gregoretti, a coast guard ship. In both cases, the League had tried to clear its customs by asserting that the blocking of ships was a collective decision of the government, and therefore also falling under the responsibility of Prime Minister Giuseppe Conte.

Article reserved for our subscribers Read also Coronavirus: in his Lombard stronghold, Matteo Salvini weakened by the crisis

Popularity at half mast

The move comes as Mr. Salvini’s popularity has waned since the onset of the pandemic, which has become the main concern of Italians over immigration, his favorite theme. A Demopolis Institute poll released this week credits the League with 25.4% of voting intentions, down eleven points in a year, as post-Fascist Fratelli d´Italia has the wind in its sails. The League, however, remains Italy’s main political formation.

“At the moment, Salvini is generating little media interest. The decision to deprive him of immunity (…) could rekindle the media attention “Franco Pavoncello told AFP. However, “A trial could be costly for him in the long run, because the charges are serious”, he adds.

Article reserved for our subscribers Read also The defeat of the far right in Emilia-Romagna, the first setback for Matteo Salvini

Britney Spears called for a redistribution of wealth and was called...

Iran is forced to maintain its economic activity despite a pandemic,...

how many are imported from Brazil and Spain / Argentina News

Washington unilaterally proclaims UN sanctions on Iran back in force

what foods should you avoid at the first meal / Argentina...