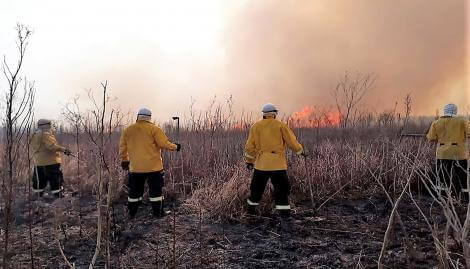 The fire started in January and, intermittently, always was. There have already been 4,500 outbreaks, 500 square kilometers of surface have been burned, there are three affected provinces and $ 20 million are spent daily on operations. But the fires are not extinguished. Is it just weather issues or is there intent? To this he alluded Erika gonnet, Minister of Environment and Climate Change of Santa Fe, in dialogue with TN.

“The weather helped these days, taking into account that the brigade members are organizing the operations based on that. But a few days ago, the entire metropolitan area of ​​Rosario was covered in smoke,” said the provincial government official led by Omar Perotti.

Gonnet explained that “at this time of year there is drought and also a fire is set as part of a livestock practice that allows changing the pasture, but there is also something that goes further.” And he revealed: “Last weekend in some areas near Rosario armed ‘cradles’ were found to set fire, which made us believe that there is also something intentional because those findings occurred in places where there is no livestock. “

From Alvear, province of Santa Fe, the minister noted that “there are several judicial cases that are progressing in various jurisdictions.” And he warned: “Someone is going to have to pay for this”.

“If someone does reckless practice, it is time for it to stop happening. I don’t know what interest there is in causing so much damage “Gonnet concluded.

The burning of grasslands stretches for 170 kilometers from Granadero Baigorria, on the outskirts of Rosario, to Baradero, province of Buenos Aires.

Four hydrant planes, two helicopters and two ships work in this week’s operations. $ 20 million is spent daily and 560,000 liters of water per day are used to fight fires.

“Governments have the means to provide more affordable housing”

Lilly Téllez hinted to La 4T about the controversial purchase of...

Latam airline has filed for bankruptcy in the US: for now,...

Regret for the death of businessman Jorge “Coqui” Layus

what do small and big investors choose