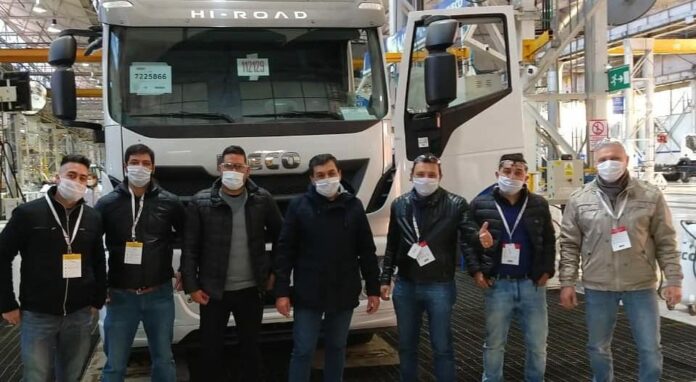 The Iveco plant returned to activity yesterday with the incorporation of 350 workers to the truck production line in Ferreyra.

The information was provided by Smata, according to which it plans to manufacture 880 units until the end of the year.

The CNH Industrial group factory remained closed for about 10 months, as it stopped producing in mid-November of last year, due to the drop in demand in the truck market.

The crisis caused it to accumulate stock to sell for 17 months.

Iveco, the automaker with the most “stock” has unsold: equivalent to a year and a half of sales

As announced by La Voz, for several months the firm has been preparing to resume production in August.

From yesterday and until tomorrow, adjustments will be made at the plant, with the aim of achieving a production rate from next week.

“It is a special day, because after 10 months stopped, the plant begins work with 350 workers again,” said Smata Córdoba general secretary Antonio Quintana.

This group joins the 40 operators dedicated to the production of Case New Holland (CNH) agricultural machinery, with which 490 people will work there from next week.

Iveco trucks have competitiveness problems compared to Brazilian models, so on many occasions the union feared the closure of the production line.

Therefore, both the company and Smata are betting on takeoff with the Tector CNG model, of which 35 units will be manufactured this year, as a test to increase production since 2021.

This truck joins the models that it had already been producing, such as the Tector Attack, Premium and Evo; Stralis Hi Road and Hi Way and Cursor and Trakker units.

On the other hand, Quintana highlighted the agreement between the union and the company by which the operators will receive a bonus of 30 thousand pesos as a bonus.

Iberia completes the purchase of Air Europa for 500 million euros

The AFIP extended the fiscal fair: until when?

Almost 80 Cordoba companies have the go-ahead to return to business...

“Banks too big to succeed”

Digital sale: the jump marks a new floor that will continue...