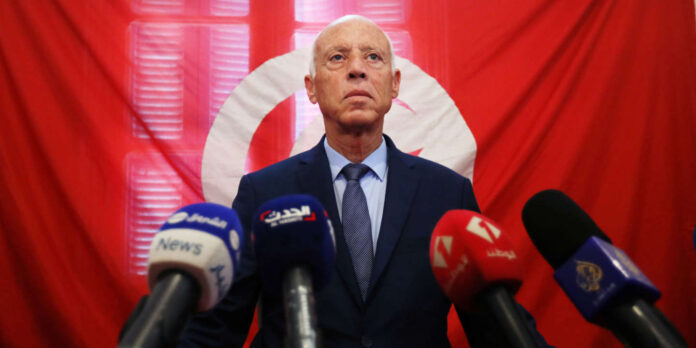 The last few days have been rich in twists and turns for the Tunisian political scene. On Thursday, July 30, Rached Ghannouchi, leader of the Islamo-conservative Ennahdha party, managed to retain his seat as Speaker of Parliament, after an eventful vote on an unprecedented no-confidence motion against him. The “Victory” which Mr. Ghannouchi immediately welcomed, nevertheless leaves the Assembly of People’s Representatives (ARP), elected in October, deeply divided. All in a context of political paralysis with yet another government being formed and increasingly strained relations between the main parties and the head of state, Kaïs Saïed.

By deciding, Saturday, July 25, to appoint an independent, Hichem Mechichi, as new head of government, the Tunisian president did not hesitate to sweep the names proposed by the formations that came first in the legislative elections, Ennahda and Qalb Tounès, the party by controversial businessman Nabil Karoui. A lone rider that sounded like a harsh reminder of the head of state’s disregard for partisan play.

Read also In Tunisia, the resignation of the head of government reinforces the political crisis

Kaïs Saïed can take advantage of the discredit which threatens a Tunisian hemicycle as fragmented as ever. The motion of no confidence against Mr. Ghannouchi – which gathered 97 favorable votes when it would have taken 109 – is thus a first, ten years after the revolution which ousted Zine El-Abidine Ben Ali from power and launched the democratization of country.

In recent months, Mr. Ghannouchi has tried to intimidate and even ridicule the head of state, including marching on his foreign affairs beds, a prerogative of the president. Eager to see the emergence of a coalition more to his liking, he also did everything to overthrow the previous head of government, Elyes Fakhfakh, a Social Democrat who had already been chosen by Kaïs Saïed. But these attempts at destabilization and his parallel diplomacy have earned him strong hostility in parliament, without really succeeding in shaking the head of state.

This last “Is leading a struggle for domination to establish its authority”, says Amin Allal, researcher at the Institute for Research on Contemporary Maghreb. If the new cabinet to be formed by Hichem Mechichi obtains the confidence of the deputies by the end of August, Mr. Saïed will have a man of confidence at the head of the executive. If not, he can still dissolve Parliament.

Ennahda like Qalb Tounès today criticize the “Presidentialization” of the plan. But it was first of all the party crisis that tipped the balance of power in favor of the Head of State, widely elected during the presidential election in October 2019. And first of all the failure of the Islamo party. Conservative to quickly install as head of government the man of his choice despite his majority in the Assembly. A failure which had led Kaïs Saïed to become more involved in the process of forming the government.

The latter never bothered with formal speeches to evoke his lack of enthusiasm vis-à-vis parliamentarism. “The era of political parties and representative democracy is over, it was just a fleeting phenomenon that will disappear”, said the candidate Saïed in June 2019, six months before the first round of the presidential election, in an interview with the Arabic-language newspaper Acharaa Al-Maghrabi.

Since his election, he has continued to circumscribe the playing field of the parties, as demonstrated by his almost unilateral choice of the last two heads of government. The ultimate goal of Kaïs Saïed is to revise the parliamentary and representative political regime desired by the 2014 Constitution in order to establish direct democracy. Wishing to overthrow the state pyramid, he wants to anchor legitimacy at the local level, in particular through local councils elected by uninominal ballot, from which regional councils would then emanate and, in fine, The national assembly.

However, this direct democracy project also suffers from the contradictions of its bearer: constitutional lawyer, Kaïs Saïed is viscerally attached to the law. However, to achieve this goal, he has only two possibilities. The institutional path, which would oblige him to submit to the rules of representative democracy and the tedious procedures of a two-thirds majority as well as the approval of a constitutional court not yet established. Or the revolutionary path, which would bring it out of legality and the outcome of which is difficult to control. Will he depart from one of his principles or will he seek levers of power elsewhere?

For the moment, his policy is to use all the margins that the Constitution gives him, such as the appointment of the head of government or the redefinition of “National security”, one of the presidential prerogatives, as an instrument of power.

By extending this principle to health, justice or social issues, Kaïs Saïed would come to perch above the Council of Ministers, interfering in public action usually devolved to the government. His recent speeches, his choice of the Minister of the Interior as the new head of government are all signs pointing in this direction.

The first Spanish women to wear pants to work, those of Tomelloso / Spain News

Germany to get a lobby register | Germany | News and in-depth reporting from Berlin and beyond | DW / German...

the blue goes down but Consultatio alerts for “intense” months /...

They will extend the prohibition to dismiss and double compensation

detail of the protocol and sanitary guidelines designed for the reopening

“My mother said that we are no longer family” / Spain...

Moratorium, a solution for every need

Pope Francis claimed to be “very distressed” over the conversion of...

Melania Trump prepares her departure from the White House and her...