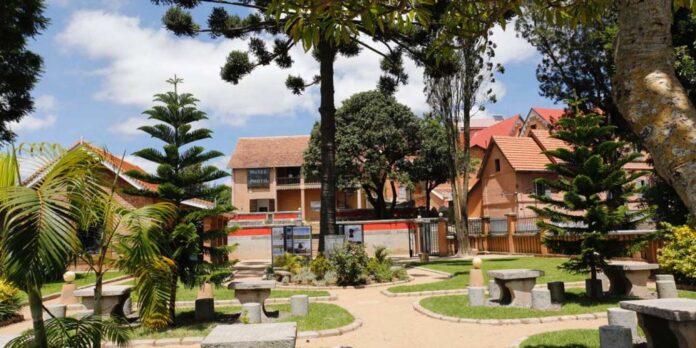 The site, on the heights of Antananarivo, offers a majestic view of the Madagascan capital that one would like to see immediately fixed on glossy paper. This is where the Madagascar Photography Museum opened in 2018. A passionate project launched in 2013 as a simple website and which has materialized five years later into a real cultural establishment. It is housed in the former Residence of the Mayors of Antananarivo, a traditional building of Merina architecture, with a typical double-pitched roof and a veranda with brick posts. This small museum has set itself the dual mission of preserving the Malagasy photographic heritage and encouraging the population of the Big Island, through these images, to appropriate its history.

episode 1 In Burkina Faso, the Manega Museum protects the language of tams-tams and masks from oblivion

In all, nearly 14,000 photographs taken between 1860 and 1960 have already been digitized by a handful of academics and more than 50,000 are waiting to be in their turn. “We chose to focus on this period, because photography in Madagascar began in 1853 in Tamatave before arriving two years later in the capital”, specifies Tsiory Randriamanantrena, director of the museum. We owe the first photo taken on the Big Island to a British Protestant missionary, William Ellis, who arrived at the time with his daguerreotype.

The little story in the big

Inside the museum, four projection rooms are planned for films with eclectic themes, such as the great characters of the XIXe century in Antananarivo or the golden age of studio photography in the 1930s. The slideshows are made from photos from the museum and commented by a voice-over based on texts drawn up with the help of historians, an anthropologist and a lawyer in several languages. The largest room and the charming garden of the museum, when the weather permits, host exhibitions dedicated to contemporary photographers.

Episode 3 In Abidjan, the new Abobo museum wants to make contemporary art accessible to all

“The photographic heritage of the museum is inseparable from Malagasy history and this is, in my opinion, the best medium to transmit it “, says Heliantha Rajaonarison, president and co-founder of the museum. This historian by training played a key role in the enterprise of collecting these photographs which today constitutes the museum’s holdings. The country’s National Archives, the institution’s first partner, have added to the collections. But these also include pictures of individuals. The little story therefore never ceases to overlap with the big one.

It is thanks to the work of Heliantha Rajaonarison that the great families of Malagasy photographers have been identified. The museum team then set out to contact them. “But we don’t limit ourselves to official photographs, specifies Tsiory Randriamanantrena. All photos are an integral part of the country’s history, regardless of the authors and where they come from. ”

From this heritage, the museum has built up a vast digital database. Like a great picture book on the history of Madagascar, before, during and after colonization. Even if, insists Heliantha Rajaonarison, “Contrary to what one might think, this period is not a turning point in the history of photography on the island. This marked a change in representations, with the colonizer’s reductive gaze on the colonized, but the Malagasy had mastered photography long before ”.

“Understanding with the eyes”

So after the first pictures of Reverend Ellis, the inhabitants adopted this discipline and private photography quickly took off. “The golden age of photography is undoubtedly the 1930s, a time when the studios grew a lot”, details Rijasolo, Malagasy photoreporter with international fame. The inhabitants, Malagasy bourgeois as well as colonists, queued up at the doors of studios like that of Ramilijaona (1887-1948) to have their portrait taken alone or with their family, he says. An attraction to film that has never wavered. “Social networks have contributed a lot to the emergence of young Malagasy photography professionals, but also to democratizing this art”, Rijasolo analysis. The institution’s resources are also available to students on site.

The museum is conceived as a place of life, and not just a place of memory. Two Saturdays a month are organized café debates on historical themes, developed with the help of the collections in the dining room adjoining the museum.

Episode 4 In Tunisia, the Bourguiba Palace, a very political museum

The public is varied, as evidenced by the French journalist and author Loïc Hervouet, who has already given two conferences: “I met old ethnographic specialists and a lot of students there. There were also Malagasy of all ethnicities and “vazaha”In the broad sense: Americans, French, Italians. The photo makes it possible to understand with the eyes, it is within the reach of everyone. “

Follow our series “Africa can be visited in its museums”

Man sentenced to five years in prison for spreading images of...

San Luis: more than 100 arrested for celebrating the opening of...

inputs from the field must be sold to OFFICIAL DOLLAR

TRAVELERS from these COUNTRIES will not be able to enter the...

In Southeast Asia, Yoshihide Suga confirms an anti-Chinese diplomacy that does...

Leaders of Serbia and Kosovo will meet Thursday in Brussels (French...

This alerts the US to those who want to travel to...

Philippe Cassegrain, Chairman of Longchamp and creator of the Le Pliage...

Bavaria mandates FFP2 masks, all of Germany may follow | ...