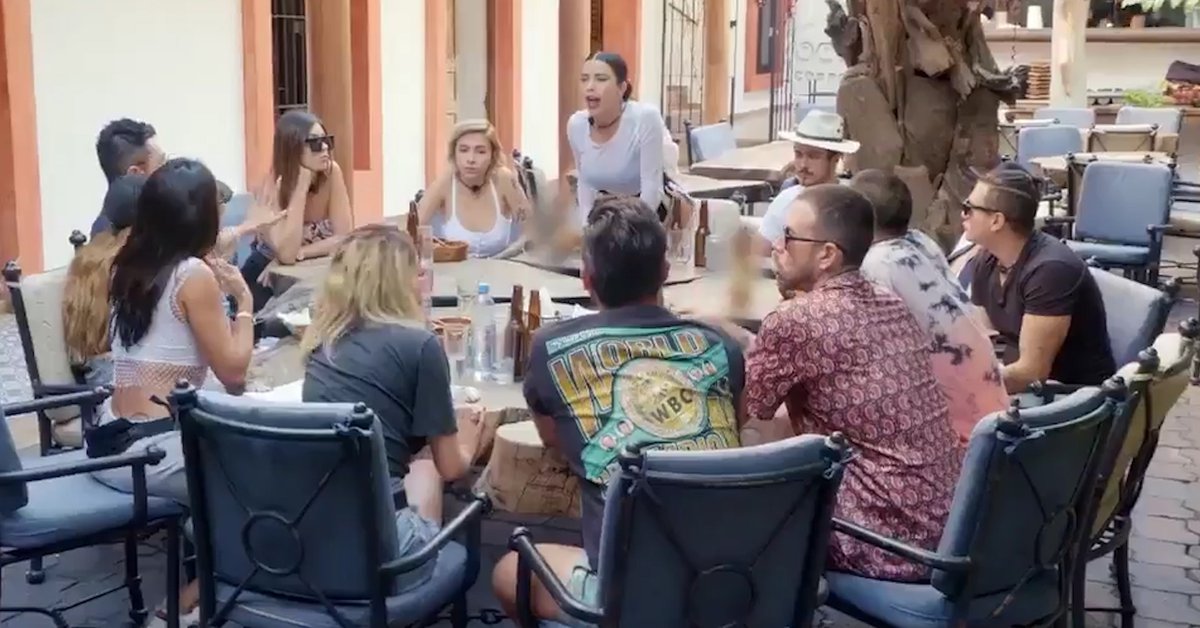 He chapter 9 of Acapulco Shore 7 started with the Dania’s outburst against Mane which was put on hold in the previous episode.

While it had already been seen how Dania threw a glass cup at Mane, Now it could be seen that the conflict did not go further because the rest of the members of the house prevented it.

“This viper and all its puppets have me until the mother * and I pissed off * I don’t know”, Dania commented on that altercation, while her friend Rocío pointed out: “A Mane like the silicones trembled.”

After her outburst, Dania acknowledged that she lost control, began to cry while Chío and Fer comforted her, and said that it would be good to leave the house.

“I want to leave, I am in time for something to happen that I do not want to happen”Dania said tearfully, but in the end “La Buchis” and Fer Moreno decided to stay at the Shore House.

Back at the house Dania showed her intentions to propose a fight to Mane without the intervention of her boyfriend Jawy, but Mane completely discarded accepting the challenge, what he did do was ask Celia Lora to speak with Dania and on an outing to a bar, “La Boss” listened to “La Buchis”.

“I accept that my action was not the best but my patience was overwhelmed”Dania said to Celia.

The conflict seemed to decrease in intensity and Celia surprised the shores with La Banda Recodo live.

The famous group even accompanied Potro, Jawy and Tadeo, who interpreted the song “El Verg * muerta”, which they composed for Jey for the occasions in which she has had a “poor” performance in bed.

Another surprise came when on the way back to the house, Mane spoke to Fer Moreno and told him “I don’t want you to go wrong with us”. He tried to explain that her actions were the result of something she did before.

In fact, it was also surprising that Jawy spoke to Fer at the house, explaining the reason for his conflicts with her.

“We are not friends, here we are a family, that is why it is so difficult to fit into a family. There is no arrogant or challenging answer or anything, these people do not fit, “Jawy told him, giving him the keys to how to be accepted among the Shores.

By the way, Karime drank so much on that night of partying that she threw up in the return vehicle and in the house she began to kiss a wall and she could not even lie properly in her bed, so she had to be helped by her companions.

And Celia Lora thought it was a good idea to get naked to enter the pool, an act that was imitated by Fer Moreno and Nacha.

Between Xavi and Pepe the passion continued, but also the conflicts and the fights, so it looks like there won’t be a wedding.

The main conflict is that Pepe seemed to immediately side with Mane in the house to be accepted and that is why he voted against Fer, conduct that Xavi reproached him for.

And in fact Fer also faced Pepe to claim him.

One more surprise came when Mane approached to speak with Chío, who does not come down from “plant” or “rejected.”

He commented that he wanted to prepare a special dinner for Jawy and asked for his help, but it was actually a strategy to leave Dania alone.

“In this house there is a bitch that is me and I need several assholes to amuse me”, commented on the scene.

However, Rocío was not so naive and soon after she discussed with Dania what Mane did. They both realized Manelyk’s intentions.

So it will be until the next episode when you see what happens to Dania. According to Mane and Jawy, in Shore StudioThey don’t spend their time planning who to disturb at home.

Mane insisted that he does not get along with Dania because it seems false and defended his position of having ignored her.

“Acapulco Shore 7” chapter 8: Dania exploded against Mane and threw a glass at him

“Acapulco Shore 7” chapter 7: the fight between Mane and Fer Moreno broke out and they decided to expel it

“Acapulco Shore 7” chapter 6: Mane now fought with Fer Moreno and called her “made up”