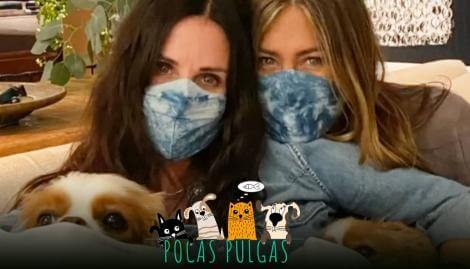 In the midst of a pandemic, one of the undeniable additions to daily life is the use of a chinstrap or face mask.

The importance of using this accessory to avoid contagion is a topic that is spoken in all countries and Courteney Cox and Jennifer Aniston took advantage of its enormous popularity and They used social media to create awareness.

The protagonists of Friends They uploaded a video of their pets to get the message across.

In the video, one of the puppies tries to convince the other of the usefulness of putting on the mask. Although the first reaction is negative, eventually the first dog achieves its goal. When the second dog “puts on” the mask, the first dog says, “I’ve never been so attracted to you.”

The video, posted on Cox’s Instagram account, ends with a still image of the actresses in the mask, and the protagonist pets.

For his part, Aniston published on his profile an image in which he appears with a black mask and ask people to wear it to prevent further increases in COVID-19 cases.

“I understand that face masks are uncomfortable, but don’t you think it’s worse that companies are closing, jobs are being lost and toilets are reaching complete exhaustion? This virus has taken many lives because we are not doing enough.”

In this line, the actress criticized that there are people in the US who refuse to wear a mask and “to take the necessary steps to flatten the curve.” “People seem concerned about their ‘stolen right’ by asking them to wear a mask, but it is a simple and effective recommendation that should not be a debate. If you care about people’s lives, please just wear the mask and encourage those around you to do the same. ” asked the actress.