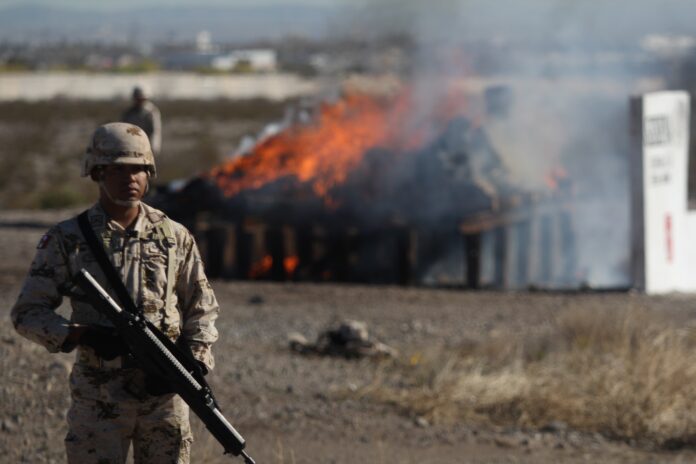 During the first two years of Andrés Manuel López Obrador’s term, The country has gone through extremely violent moments, particularly in recent months, as the figures show.

On June 7 they registered 117 murders in 24 hours, the most violent day of the year to date. The previous record occurred on April 20, when 114 people died within a day.

According to analysts consulted by different international media, if the trend continues as it has in the first four months, 2020 could become the bloodiest year in the history of Mexico.

Criminal organizations have targeted both low-ranking Mexican Army elements and high profile political figures. There have been carefully planned massacres and murders.

“This is a cost that we are now paying for years and years of perfect and continuous impunity in Mexico”Said Falko Ernst, an analyst at the international crisis organization International Crisis Group.

One of the attacks with the greatest impact was carried out in the residential neighborhood Lomas de Chapultepec, in Mexico City, at the end of June. A group of attackers, allegedly disguised as construction workers, arrived in trucks and tried to assassinate to the chief of the capital police, Omar García Harfuch.

During the battle between the criminal group and the security of the official, three people died: a woman, civilian. who was on his way to work, and two of the bodyguards who were protecting Harfuch.

Despite being shot three times, García Harfuch survived the attack, which is awarded to the Jalisco Nueva Generación Cartel (CJNG), considered by experts as one of the most violent worldwide and among the first in Mexico to use explosives on a large scale.

The cartel itself is implicated in other recent shootings and massacres. In Irapuato, in the state of Guanajuato, attackers entered a rehabilitation center, or an annex, and forced patients and staff to drop to the ground before run one by one.

In the massacre, which is supposedly part of the war between the Santa Rosa de Lima Cartel and the CJNG, 26 people died. Guanajuato was considered one of the most peaceful federal entities in Mexico, however, It has become the most dangerous thanks to the extension of the influence of the CJNG in different areas of the country.

“They have been very aggressive from the outside and They’ve got a way to get away with it and assassinate federal authorities, including a lot of police in Guanajuato, and shot down military helicopters, “Falko Ernst explained to the British BBC.

The expert argued that the underlying problem is the fine line between state security forces and organized crime. Although the CJNG has publicly declared itself an enemy of the state, there are still several suspicious connections with fragments of the state, including on a federal level“, said.

Critics of President López Obrador refute that, despite the promises, his administration has not addressed the issues together over impunity and the state’s involvement in criminal activities or even developed a coherent security policy.

For several in Mexico, the period between 2009 and 2011 brings chilling memories: widely regarded as one of the worst years of the drug war in the countryIt was a time of fierce violent annihilation among the cartels. Communities lived under a system of curfew and shootings to fight for territorial control were common.

However, monthly, homicide figures are higher today. The killings observed in 2019 and this year suggest that Mexico has returned to a familiar pattern of violence, although some regions remain in quarantine due to the worsening of the COVID-19 pandemic.

The money ran out in the Santa Rosa de Lima Cartel: El Marro does not have to pay the “payroll,” said Durazo.

On the beach: new images reveal how Chapo’s wife Emma Coronel would have spent her birthday

How to check if a password has been leaked / Argentina...

My Personal Business, Telecom’s e-commerce platform that will compete with Mercado...

What to see on VALENTINE’S day? / Argentina News

Coronavirus.- Russia increases the daily balance of coronavirus with 5,475 cases...