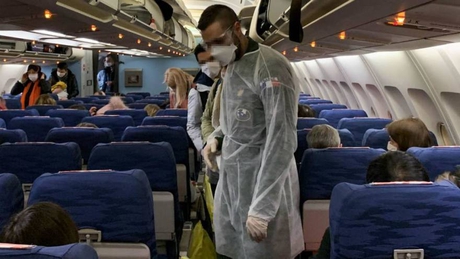 Through the special cabotage flights of Aerolineas Argentinas, the return to regular operations is being prepared

The special cabotage flights of Aerolineas Argentinas, depart and return to Aeroparque Jorge Newbery, where the concessionaire, Aeropuertos Argentina 2000 developed a infrastructure valid for these operations, but also as a way to prepare for the return to regular operations.

It had been operating since January under sanitary protocols arranged by the Ministry of Health of the Nation and together with different organizations such as the Ministry of Transport of the Nation, Migrations, Airport Security Police (PSA), Customs, all under recommendations of the WHO (World Health Organization).

Both in Aeroparque and throughout the country, they have been installed protective acrylics in the check-in area and markers to maintain the regulatory distance between the passengers.

Some examples of airport procedures are the iIncreased disinfection of handrails, doorknobs, gel alcohol from all dispensers placed in the terminals and additional disinfection inside the sleeves.

The special flights of Aerolineas Argentinas to some destinations in the country work with strict hygiene and safety protocols amid the coronavirus pandemic and the company is preparing to resume regular cabotage operations in the second week of July, as announced by the Ministry of Transport.

Aerolineas Argentinas has a protocol that it is already applying on special flights.

But everyone who gets on a plane will then find a totally different picture from what was usual before the start of the pandemic restrictions.

The strict sanitary security measures will be one of the modifications that the passenger will face when traveling and, in that sense, Aerolineas Argentinas already has a protocol that it is applying with very good results on the special flights that it has been carrying out nationally and internationally.

Changes at the airport and on boarding

The change in the conditions for traveling is seen at the entrance to the airport, where it is necessary to queue, with distance, outside the sector of entry to the Terminal, to pass the sanitary control of temperature and data, before accessing a hall check-in, where only a few counters are enabled, but sufficient for the few occasional daily flights.

A perfectly marked corridor with tapes, small docks for hygiene with alcohol gel, the positions to keep the established distance marked on the floor and the screens that separate the staff at the countersThese are some of the specific measures implemented in the pre-flight process, which includes filling out an affidavit stating the details and address of the passenger, which will then be delivered at destination.

At the time of embark Changes also occur, due to the fact that distancing strictly speaking, a differentiated access to the aircraft is added according to the location in it, ascending first of all those who are located in the rear rows of the aircraft and ultimately, those who travel in the front, always seeking a movement in small groups to avoid crowds inside the plane by accommodating the hand luggage in the compartments.

According to a work being carried out by the National Civil Aviation Administration (ANAC) and the Ministry of Transport of the Nation, it will be allowed to carry a gel alcohol of up to 100 ml in hand luggage and that the shipment will be made by small groups and from the last rows forward.

Efforts will be made to limit movement at the airport and on aircraft.

As for the flight itself, requests to limit movement within the aircraft as much as possible and informs that, for the moment, the reading material, blankets, pillows and headphones are suspended, as well as the food and drink services on domestic and regional flights.

On international flights, the food and beverage service on board will be limited. Meanwhile, a contingency menu will be offered in individual bags, with fresh and industrialized products. Upon completion, it will be requested discard all items in the same bag where they were received to decrease interaction with the crew.

As for the aircraft, specialized personnel will carry out the cleaning and disinfection procedure before and after each flight, and the tasks will be intensified in high contact areas such as seats, armrests, folding tables, seat belts, screens and controls, as well as in bathrooms, waste baskets, food transport carts and doors.

The headrest protector it is replaced after each flight and upholstery and carpet cleaning procedures are reinforced.

The company clarified that it has an air conditioning system which has special high efficiency filters (HEPA, High Efficiency Particulalate Air filters). This system used by the industry allows the constant renewal of cabin air, eliminating 99.9% of bacteria and microbes that circulate to make the plane a safe place.

Something that will have to get used to because it is a modality that will remain, for a long time, for those who travel by plane.