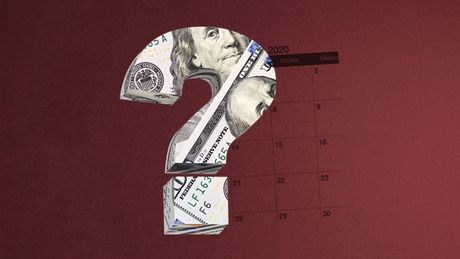 Most Argentine assets closed on positive ground given the expectation of the swap. The financial dollar suffered from regulations and fell

The second full month of quarantine was marked not only by social and compulsory isolation but also by expiration of the debt negotiation period sovereign. So, the news about talks between the economy minister, Martín Guzmán, and creditors they were setting the pulse of local prices.

Contrary to the famous saying “Sell ​​in may and go away“(in English,” sell in May and disappear “) the month that comes to an end was good in terms of valuations for Argentine assets.

Bonds: at the rate of debt

The bonds moved in May to the rhythm of negotiations with creditors. At the end of the month, and despite the ups and downs, the main public securities in pesos and dollars ended with positive numbers. Variations in the cash settlement and the dollar Mep also helped sustain the valuations of government securities.

“May continued to show a recovery for fixed income, in terms of pesos, with a large contribution from the implicit exchange rate, but also recovering bond parities. Argentina decided extend the term of the exchange of bonds with foreign legislation Until the 2nd of June, hoping to reach an agreement in the negotiations with the international investment funds, who rejected the first proposal. It transpired that there would have been an improvement in the conditions, “indicated the monthly report by Tavelli y Cía.

Mauro Mazza, from Bull Market Brokers, agreed: “In the fixed income market everything moved with the funds’ first counter-offer in early May, which created a price rally that escalated when the Economy said they were preparing a new offer. That led to parities above 45 for various New York law bonds. “

However, the truth is that Argentina did not pay the coupons of 3 series of global bonds on May 22, at the expiration of the grace period, so today it is in selective default of its debt.

At the local level, Tavelli highlighted the behavior of inflation-adjusted securities and those denominated in US currency. “CER-adjustable local currency denominated bonds showed significant climbs on the long stretch of the curve. The dollar denominated securities showed more intense behaviors: strong increases, up to more than 30% in Discount series, although the improvements did not have a deadline distinction, “the report detailed.

At peso market, an interesting case is that of bond tied to the monetary policy rate. It advanced 7.1% in the month that ends and the market is preparing for the coupon payment in June. This was highlighted by Personal Investment Portfolio (PPI): “In this month that begins, remember that as main maturity is the amortization of the monetary policy rate bond (TJ20), which between capital and interest would add an amount around $ 130,000 million“ 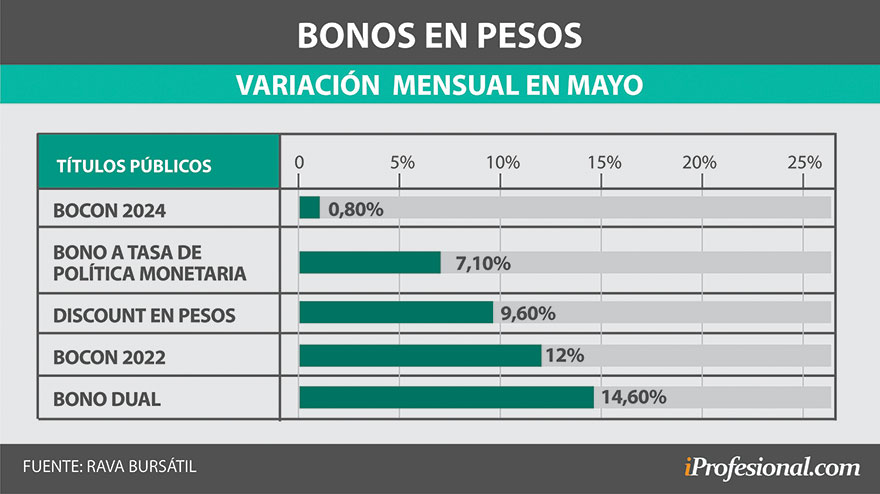 For his part, Mazza estimated that there were interventions by the Central Bank or the Anses Sustainability Guarantee Fund, the result of which was a jump in the price of the Bonar 2024 and a fall in the price of the dollar Mep. This bond is one of the most used to obtain dollars in the Stock Market and its quotation in hard currency advanced more than 45% in the month.

In tune with improvements in government securities, country risk fell 865 units in May (-24.7%) and closed the month at 2,634 points.

The S&P Merval Index accumulated a 15.5% rise in pesos in May. This gain added to the more than 34% that had advanced in April. In this way, the main equity indicator of the Buenos Aires market reversed a good part of the falls seen during the first quarter. However, it continues with a snegative rate of 9.2% in the first 5 months of the year.

Within the main panel, the most prominent papers of the month were Securities Financial Group (+ 55.5%), Argentine Stock Exchanges and Markets (+ 36.4%), YPF (+ 30.8%) and Grupo Supervielle (+ 28.3%). Within the general panel, meanwhile, the action of the Rosenbusch Institute stood out.

“May showed a continuity in the recovery that started last month, but it was also a month of significant volatility. Highlights the rise in the financial sector, with improvements of up to 55% in Grupo Financiero de Valores, accompanied by BYMA and Supervielle. The banks with the largest market presence climbed, although without much momentum, “Tavelli said in his report. 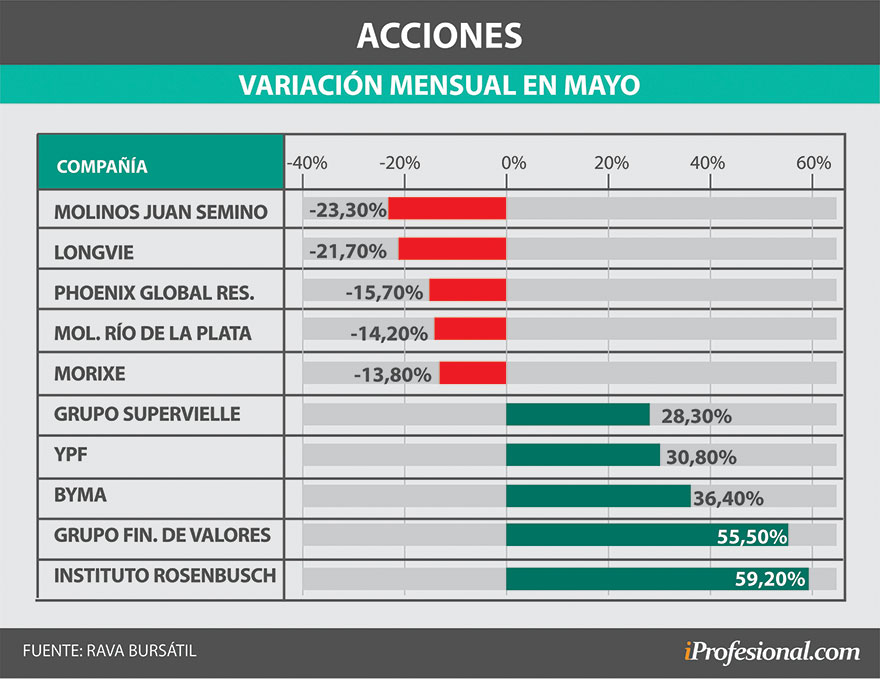 For his part, Mazza referred to the reasons behind the advancement of BYMA and Grupo Financiero de Valores. “BYMA is positioned as the great undervalued asset. The market realized that it is a company far from all the problems of the debt and the war of the Government against the cash liquidation. In addition to having capital reserves equivalent to its capitalization, “he said.

On Financial Securities Group He noted that “it was oversized thanks to the repurchase of shares by the holder of Banco de Valores, which allowed prices to be sustained “but warned that” there were no underlying fundamentals “.

Between the Top 5 Losers of the Month, all the papers belonged to the general panel. He highlighted in particular the recoil of the flour mills, than had been the most prominent during April, when flour consumption was triggered by quarantine.

For those seeking to get out of Argentine risk while continuing to invest in pesos, lCedears are a good option. The whole plaza of cedears (which are also used to make cash with liquidation) was seen affected in the second half of the month due to restrictions on the financial dollar.

In the month that ends, Mazza highlighted the performance of Mercado Libre and Globant, for the good balances they presented. The first gained 45.96% in May and the second, 22.16%.

“Mercado Libre is one of the few companies that showed muscle in this crisis of the pandemic due to having the right business at the right time. Globant is another technology company that also took advantage of the companies’ need for a technological structure, “he said.

The dollar stood out in May, due to spikes in financial quotes and multiple regulations that the Central Bank and the National Securities Commission published to try to contain it. Among them, the prohibition to buy official dollars during the 90 days before and after to have acquired a dollar on the Stock Exchange and the new 5-day parking lot to buy foreign currency in the financial market.

What to expect in June?

Next month will continue to be dominated by debt uncertainty. “While the expectation of a short-term deal drove prices this month, lack of concrete progress can put pressure on prices and eventually lead Country Risk to the upside, “warned PPI.

The market will closely follow the talks between Guzmán and creditors

For Damián Zuzek, CIO of Grupo SBS, there is “value in those investments that act as a hedge against the fluctuation of the exchange rate“such as” the SBS Capital Plus fund that invests in a portfolio of peso-denominated bonds that is protected against variations in the dollar. “

“For investors with savings in pesos and with a medium time horizon, we find attractive in the stock market. Although the macroeconomic challenges for the coming months are significant due to size and uncertainty, added to the punishment of COVID-19 and the continuity of the balance of payments crisis, when comparing the market cap with the balance sheets of the companies, indicators stand out that can serve as anchors to forecast the roadmap of each business“, Hill.

“To re-elect Donald Trump would be a change in the course...

March of private schools across the country: they warn that more...

What to do if your cat is pregnant?

Flurry of “outlets”: they grow on the web, with average sales...

Passengers of the cruise ship anchored in Uruguay with more than...

What will be the next increase for domestic workers? / Argentina...

Signs of recovery in the automotive industry: production increased 16%