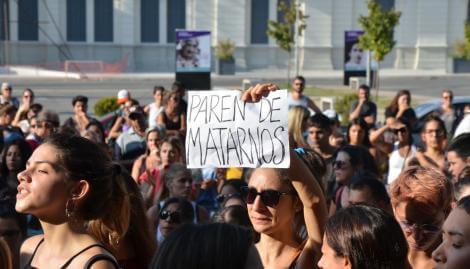 They presented in the Senate a bill that proposes declare a public emergency in social matters due to gender violence for a term of two years. The objective is to allocate a greater budget to the Ministry of Women, Gender and Diversity in the face of the figures of femicides that indicate that, since the beginning of the isolation, a woman dies every 29 hours.

The project was presented by the senator of the Frente de Todos Norma Durango, current president of the Senate Commission on Women. The initiative seeks to coordinate with the provincial and municipal governments the allocation of budgetary resources.

In addition, it proposes that training be implemented to form specialized violence units at the first level of care that work in the prevention and assistance of acts of violence for gender reasons.

The project also urges the creation throughout the national territory of at least one Comprehensive Protection Home or shelter in each jurisdiction.

Durango affirmed that the objective of the initiative is “prevent, and reverse the number of victims for gender violence in all its types and modalities in our country ”.

“We want, we need, we urge that the National Executive Power, through the competent areas, adopt the necessary measures for the implementation of an emergency law for violence, to provide the necessary budget to the Ministry of Women, Genders and Diversity, “said the senator.

Since the social, preventive and compulsory isolation was decreed by the coronavirus pandemic on March 20, 22 femicides were registered. This indicates that a woman was killed every 32 hours.

“As has been evident, male violence It does not stop in times of pandemic. Women who suffer gender violence mostly live with their aggressor, and therefore the quarantine finds them more exposed: 72 percent of the femicides that occurred took place in the victim’s home, “the Gender Violence Observatory Now That They See Us said in a report.

Hezbollah leader says he supports the French initiative, but calls for...

Greta Thunberg is of legal age and promises to continue “bothering” ...

Impressive explosion in the port of Beirut: a warehouse exploded

Why you should eat AVOCADO: benefits of this food / Argentina...

How many doses of VACCINES will the US get in July? ...

Why ARGENTINES consult to settle in URUGUAY

This alerts the US to those who want to travel to...