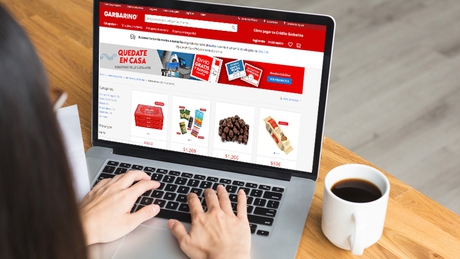 The home appliance chain offers its online channel to overcome insulation with delivery of food, beverages and bookstore and pharmacy items

While debating in a tortuous process of restructuring a passive millionaire with banks and suppliers, Garbarino expanded his business line beyond household appliances.

The main chain of this category in the country has now added the sale of a large quantity of food and beverages and even of bookstore items. Based on the restrictions that must be complied with in the framework of the measures taken so far by the Government to combat the advance of the coronavirus, the company’s executives are looking for all kinds of formulas within their reach to be able to invoice.

It is that currently, and due to the mandatory quarantine, it cannot have its more than 200 stores open to the public and it did not have online operations enabled either.

But after the Government’s decision to expand the e-commerce option to several more items, now Garbarino has launched not only to offer its traditional items but also aa large number of items that can usually be found on the shelves of supermarket chains.

That is to say, from wine; whiskey; paper napkins; caramel; toilet paper; toothbrushes; coffee capsules, up to alfajores and breakfast boxes for vegans; noodles; flour, among others.

Too almonds, mix of nuts, cashews, walnuts and a large number of stationery items such as notebooks, set of sticky notes and pens.

To all of which he adds products that are usually available in pharmacies such as nebulizers, sphygmomanometers, heating pads and even condoms.

A great online gondola that is found on the company’s website and that customers can receive through home delivery, since the electrical appliance chains were included among those that can join the marketing of their products by delivery.

Garbarino seeks to overcome the crisis

From the company they explained that the expansion of their item is carried out through the system called market place in the style of what large international chains of this type such as Amazon already do, which has already become a kind of digital poly item.

Among the brands that channel their sales through this Garbarino tool are Johnny Walker; Jack Daniels; Elite; Rutini; Prime; Norton; Trumpeter; Wakas Pasta; The Coffe Store.

It does this with a complicated financial scenario as a background. Its executives come trying to negotiate a re-profiling of its bank debt as well as with suppliers that amounts to almost $ 12,000 million and that also includes the obligation to sell the retail chain.

Initially, it had reached an agreement to add the Inverlat fund as a new owner, who had agreed on a plan to cancel the $ 5 billion debt with a group of creditor banks, but in late March withdrew the offer due to the impossibility of reaching the same agreement with the supplier companies of Garbarino.

In this way, the company’s board of directors continued in solitude the conversations that could come to fruition in the coming days and that would allow the entry of a new majority shareholder.

Although the waste collection company Covelia would be the one indicated, the market ensures that there are also negotiations with another investment fund of which more details are unknown.

Meanwhile, the economic consequences derived from the strong restrictive measures taken by the Government to prevent the circulation of the coronavirus have generated a strong negative impact, to the point that he had to pay his staff only 30% of wages.

A complicated scenario that could be repeated in the coming months, bearing in mind that mandatory social isolation was extended by President Alberto Fernández, at least until April 26.

To try to mitigate the damage, the chain refloated its omnichannel strategy, which combines its online and offline sales infrastructure and even its logistics to companies that want another window to offer their products.

A plan that started a few months ago from the viral phenomenon that avocado became, Considered the favorite food of millennials and that began to be offered by the company to its consumers.

Until before the crisis, and according to a note published by iProUP, the result of this process was positive, with visits to its website that grew 50% compared to a normal day and that had an impact on the sale of all new products.

At that time, the objective of using the market place was ambitious: go out to compete with Mercado Libre and transform, at the same time, into an ecommerce heavyweight without resigning physical coverage.

With the coronavirus crisis now hitting hard in 90% of the national economy, this strategy seems to be more modest, seeking to generate alternative channels that allow it to survive the rigors of an unthinkable health and economic crisis such as the one that has triggered the fight against Covid-19 pandemic.

How much are the chances of contracting coronavirus on a flight?

The rebirth of San Alfonso: from almost melting to tripling its...

In the Middle East, the continued American disengagement

Hate crimes in the United States reach their highest level in...

Argentina presents new bonds that it will offer to creditors in...

“Banderazos” against the expropriation of Vicentin

Zacatecas adds a new deceased by COVID-19 in one day

Bitcoin, near its all-time high: so you can invest / Argentina...