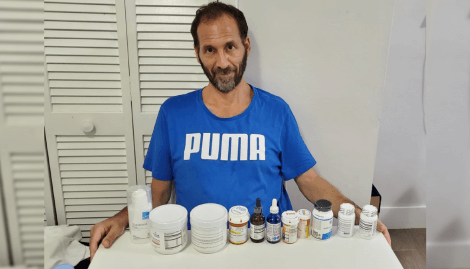 “I tell a little about my situation, I am sick with Amyotrophic Lateral Sclerosis (ALS) which is a disease that attacks motor neurons and through them to muscles, weakening them. “ Leonardo Makse, an Argentine who traveled to the United States for medical treatment and could not return: two weeks ago he was stranded in Miami, the city that could become the new focus of the pandemic in that country.

The treatment carried out by the stranded Argentine continued for another two months in Buenos Aires. The spread of Covid-19 in the North American country forced its interruption, an unexpected brake that has already suffered his health.

In dialogue with TN.com.ar, Makse explained that he arrived on March 16, accompanied by his 16-year-old son, and was due to return on March 27, but at that time flights had already been canceled. And two weeks ago they expected a repatriation flight “that never came.”

Since then, he rents a studio (a large studio apartment) comfortable for both of them, 15 minutes away from the center and six blocks from the clinic, two fundamental aspects for Makse trapped in the country that has exceeded half a million infections and has already exceeded Italy in terms of the number of deaths from coronavirus.

Although the consulate made available to both a list of hotels where they could stay, but due to their condition as a high-risk lung patient, Makse preferred to stay isolated, in that property located at the height of the Corel Glabes beaches, in the state of Florida that registers about 18 thousand cases of coronavirus.

“I am well and quite protected from the pandemic, especially considering that here in Miami, quarantine is not being carried out very well and the spread of the disease has become uncontrolled. Along the avenues, vehicular movement is permanent at all times, “he said.

The fear is that the number of infections will accelerate in the coming days. “We think we can be stranded here for a week,” he lamented.

“By day the number of infected and dead increases dramatically. It is said that this will be the next New York,” he says fearfully. And adds: “The biggest risk we run is every time my son has to go to the supermarket to buy something, even if he goes with all the precautionary measures”

Father and son have everything they need: chinstrap, gel alcohol, spray disinfectants and try to keep their distance from other people. And although they are not recommended, they have gloves.

Although the Argentine consulate in the city closed its doors, one of its members is in contact with Makse. “We have permanent assistance and they are aware of everything and they have us registered in the priority list for when there is a flight. But, of course, the issue is decided between the Government and the Ministry of Health”, that is the reason why wrote the letter.

Finally, the Algerian warns “a subject that is not minor”: the economic one.

“It was two, for three, more weeks than I have to pay that were not in the initial calculation. For example, credit cards are already at the limit,” he said, but clarified: “I still don’t want to put the economic issue within the problem, because here I have a more serious one, which is my health. “

Good morning and happy Easter to everyone, my name is Leonardo Makse and I need to send this letter to the President of the Nation or to the Minister of Health. Can you help me spread it?

I tell a little about my situation, I am sick with ALS Amyotrophic Lateral Sclerosis which is a disease that attacks the motor neurons and through them the muscles weakening them.

At this moment I am stranded with my son Franco in the city of Miami where I came to do medical treatment for my illness, I came for two weeks on March 14 and was due to return on March 28 but at that time the flights were canceled.

I clarify that the treatment I came to do begins with two weeks here and then continues for two months in Bs.As. At first I had an appointment for February and then they changed it for 3/16 and I could not postpone it more (until after the pandemic) because as it was a progressive disease, we had to act as soon as possible. In fact, My physical condition suffered in that month that my appointment was postponed.

This disease, also attacking the lungs, makes me a patient with a very high risk of coronavirus, which is why I have been undergoing quarantine in the department since treatment with all the precautions in the case ended.

That said, the problem is that two weeks ago we have been waiting for a repatriation flight that never was, and due to my condition, I need to return to my country as soon as possible, submit to the 14-day isolation and continue with my treatment.

This is my case, but here in Miami we are more than 120 people registered by the Consulate, which assists us and is aware of the problem, we are ready to return, each with their emergencies, many with health problems and others because of age, the issue is that we need to return urgently.

I am not asking for a flight to leave tomorrow to come looking for us, but they are already waiting for two weeks, and today, listening to Foreign Minister Felipe Solá, where he expressed his concern about the issue, said that the two main problems they have are Madrid and Miami precisely. for being the cities with the largest number of stranded passengers.

So I strongly urge you to double your efforts to start repatriating Argentines from Madrid and Miami as soon as possible, Because several flights will be needed for this, and here in Miami the peak of coronavirus infection is expected for the next two weeks.

So there is no time to wait. Because the more time passes the worse the situation will be.

I know the task is not easy, even that until depends on the US government to authorize flights, but I hope it can be resolved as soon as possible, thank you very much in advance.

To those who can viralize this letter, thank you and sorry for the length of the message.

Circles in the sand of purgatory

Richard and Mildred Loving, the love that changed America / Argentina...

Qatar lifted its flights from Argentina and increased them in the...

How to take a turn to travel by train

this is the exodus of companies / Argentina News

new provisions of the IGJ