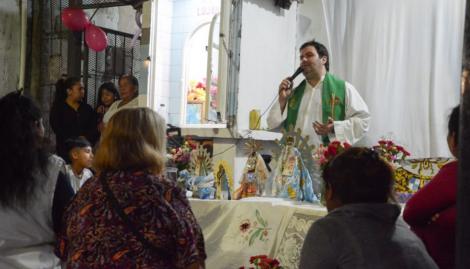 In the last hours, a video filmed inside the Ricciardelli neighborhood, a former villa, began to circulate. 1-11-14, which shows the breach of isolation measures imposed by the national government. A large number of people can be seen walking through the streets and various street vendors operating normally.

Before the diffusion of these images, the father Juan Isasmendi, pastor of the ‘Madre del Pueblo’ church in the town of Bajo Flores, came out to clarify that what he shows that video “does not represent reality” of what happens there.

“Families are under quarantine and they do it with much sacrifice, even going through situations of indignity that for others would be unbearable to tolerate. People only go out to buy food or medicine, and I know it. I’m from this neighborhood and I live here, that’s why I say it for sure, “said the religious in a statement.

In turn, Isasmendi maintained that the person who recorded how people walked through San Juan and Bolívar streets to buy vegetables and other food at a street fair “leaves the neighbors badly stopped“by implying that isolation is not being met.

“I don’t know the guy who uploaded the video, but surely he must have thought he could help by claiming the authorities. There is a fight between delegates, so it seems to me that he wanted to make a complaint so that the authorities come. Maybe it was with good intention , but it went wrong, “he added.

In addition, he asked not to increase “panic and confusion,” and clarified that “in dining rooms, social distancing is respected.”

In closing, he emphasized the needs they are experiencing these days. “We don’t need no more Police, we need means to live more dignified. Bread, health and work, winter coat, mattress, a roof and essential care. Everything else is a projection of other social latitudes that do not feel in their flesh the pain, hunger and sad eyes of their children for not having bread on the table. “