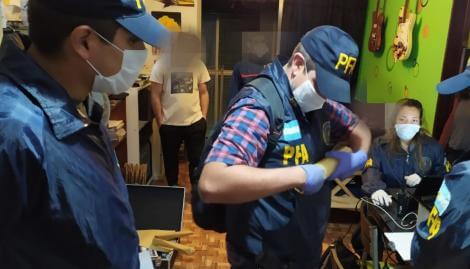 A video that contained an audio as heartbreaking as it is false it became viral during the quarantine and caused fear and alarm around the Posadas hospital, the same one where a drug is tried to treat the coronavirus.

The creator of the publication, Santiago Rubén Aciar, was detained this Tuesday by the Technological Crime Investigation Division of the Federal Police in the department of Balvanera where he lives. He was charged with “public intimidation”.

“There are three floors full of coronaviruses and they do not want to tell anyone because it is a national hospital and is run by the Government,” said the voice in off from a woman in an audio that, supposedly, had been shared on WhatsApp. None of this was true but the author accomplished his mission: generate panic with a false data.

The concern it generated reached TN and the People, where the users requested a journalistic investigation into the alleged situation in the Posadas.

The post, published on the YouTube channel “CosadioChannel”, came to have 144,989 views until it was removed by court order, sources in the case told TN.com.ar.

In addition, sources from the medical center told this media that Aciar’s actions generated “a lot of uncertainty, consultation and fear among hospital staff and patients.”

And although they cannot assure you, when the video audio started to go viral, the Posados ​​authorities noted that “it went down a lot” the competition to donate blood.

“The campaign was affected just now that keeping the blood bank running is essential,” they said.

The negative impact it generated led the director of the Hospital, Alejandro Maceira, to denounce the publication to federal justice.

The case was in the hands of the prosecutor Santiago Marquevich and judge Néstor Barral, the same ones that investigate the case of the young man with coronavirus who attended a party in Moreno and infected at least 11 guests.

In the procedure in which the man was arrested, a cell phone and the notebook that was used to upload the video to the Internet were seized.

It would not be the first time that Aciar discloses false information through social networks, as he himself published in one of his Facebook profiles. The account where the fake audio was published would be a continuation of the “Cosadio” channel, which would have been closed by Google for the same reason.

The fake audio that caused panic

“(…) There is any amount, it is a pandemic already … and people do not know anything Nati, I have to say it at the meeting. Show them my recording, we are from the church, we have to spread this. ”

The barrel of oil registers gains in New York and London

Without a competitive environment, there is no sustainable export

Nicolás Trotta: “If a family cannot pay the school fee, there...

new stage in the City

Quarantine: San Juan enabled family reunions and there are already 6...

Edesur responded to mayors: what did it say about blackouts

The decline to return to the future