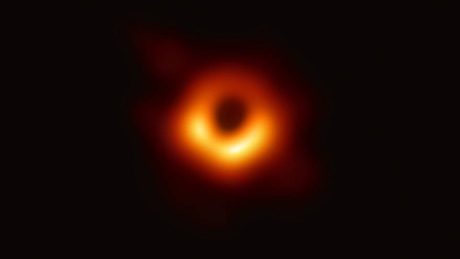 In the field of astronomy it is one of the most studied phenomena, but until recently it has never been seen clearly.

A group of astronomers announced that by first time could see the never sighted: a black hole, a cosmic abyss of such depth and density that not even light can escape from it.

“We have exposed a part of our universe that has never been seen before,” said Shep Doeleman, an astronomer at the Harvard-Smithsonian Center for Astrophysics and director of the collaborative project to capture the image, the Event Horizon Telescope (EHT). This was reported by the prestigious newspaper The New York Times time ago, in an article in which he also detailed the characteristics of this discovery.

The image that specialists could get showed a ring of light around a dark circle which is at the center of the galaxy Messier 87, about to 55 million light years from Earth and which resembles the Eye of Sauron (from The Lord of the Rings). It looks like a smoke ring that frames a one-way portal to eternity, a portal whose fate is unknown, a portal that no one has yet passed through.

The Photography (found on the cover of this article) could be taken after two years of computer analysis of the observations made by a network of antennas that together form the Event or Event Horizon Telescope. In total, eight observatories in six mountains and on three continents showed their antennas towards Virgo in ten days of April 2017.

The telescope network share your name with him edge of a black hole, the point from which there is no flying back: beyond the event horizon, or event horizon, nor can light escape the force of gravity of the black hole.

The images allowed astrophysicists see that inner part of the black hole for the first time, something that until now had not been possible. The energy inside is believed to be so powerful that it can power quasars – a very intense celestial radiation source that looks stellar but whose exact nature is unknown – and other phenomena at the center of galaxies, such as “jets”. of radiation emitted in galaxy M87.

To the extent that dense gas and hot it goes around the black hole, the pressures and fields of magnetism make the energy sprout from each side of the hole. This gives black holes their main feature, which in turn constitutes almost an oxymoron: despite its name, they are constituted as some of the brightest objects in the universe.

The image disclosure, which was done simultaneously in six places in the worldIt happened almost a century after the images of bent-looking stars made famous Albert Einstein Y confirmed his general theory of relativity. This ascribes to gravity the deformation of space and time with matter and energy, as if it were a mattress that sinks under the weight of those who sleep on it, and postulates that for this reason the contents of the universe, including rays of light, they follow curved paths.

This is how the general theory of relativity did rethink the cosmos as a place where space and time can twist, expand, break and even disappear forever inside a black hole.

Today there is a consensus that the universe is full of black holes waiting for something to fall into them.

Many are already gravity graves of collapsed stars. Others, at the center of almost all galaxies, are billions of times larger than the Sun.

In the center galaxies would have a black hole

So far there is no answer as to how such nothing-containing giants arose. Nor is it clear what happens to what falls into a black hole or what forces are at the center of it; the theoretical mathematics and physics indicate that there the density approaches infinity.

Because the interstellar space is full of charged particles, like electrons and protons, radio waves that arise from black hole there are riots and that did not allow to see in detail the fountain to the center. “It’s like trying to see through frosted glass,” said Doeleman, the director of the EHT.

That is why astronomers needed to shorten the radio waves from their radio telescopes to spot through the haze and required a much larger radio telescope. That is to say that as the diameter of the antenna is greater, the greater its resolution or magnification, so that it will allow us to see in more detail the black hole or any other structure that we are looking to observe.

Thus was born the EHT project, which combined the data from radio telescopes, some of which are at great distances from each other; one of them is located at the South Pole, there is another in Hawaii and one in Spain. Using a technique known as very long-base interferometry, professionals working on the Event Horizon Telescope project created a telescope the size of the same planet Earth with the power to have high resolution details as small as a fruit that might be in the lunar surface.

In addition, the network of telescopes has been adding antennas over the last decade, with the aim of expanding the images that could be obtained and making them more detailed. At the beginning of 2015 They were used seven telescopes to focus the center of the Milky Way, where there is believed to be a supermassive black hole called Sagittarius A *, and the M87. However, back then bad weather affected the observations, so the investigation is still ongoing.

Two years later, in April 2017, the network that was already eight telescopes synchronized their atomic clocks to look for the target for ten days.

But the study does not end in mere observation. Once the observation is made and the images are taken, all of them must be analyzed and compared with the theories that the specialists have about the studied phenomenon. So the team it took two years in collate the results of those observations. The data was so much that it was not possible to transmit it over the internet. What was the solution? The information had to be stored on hard drives that were flown between the Haystack Observatory at the Massachusetts Institute of Technology (MIT) and the Max Planck Institute for Radio Astronomy in Germany.

He EHT team was divided into four groups to assemble the image from the data. To maintain objectivity, Doeleman reported that those four teams had no contact with each other.

But the observation of the black hole and the reconstruction of the images did not end the project, which after that moment continued working. In April 2018 added a telescope in greenland to collaboration for another observation of M87 and the Milky Way in which twice as much data was collected as that collected in 2017.

Those new observations They weren’t included in the 2019 reveal, but they will help astronomers review the 2017 results so they can monitor changes in black holes over time.

“The plan is to make the observations indefinitely,” Doeleman said, “and see how things change.”