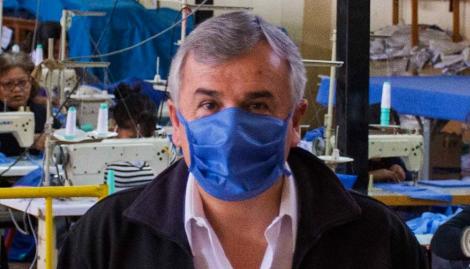 In a change in protective behaviors, and distancing themselves from the line of the national government, to stop the advance of the coronavirus, the provinces of Jujuy and La Rioja imposed the mandatory use of the chinstrap on public roads.

In La Rioja, Governor Ricardo Quintela established by means of a decree the compulsory use of chinstraps or facial protectors for all citizens who circulate on the street from Monday at 00 hours. The provincial government announced that through Decree No. 422/20 it is established: “The compulsory use of sanitary chinstraps and / or facial protectors for all citizens who travel through the territory of the province.”

About “face shields”, the La Riojan authorities warned that it refers to scarves, scarves or any other element that can serve as a protector of the mouth and nose.

Meanwhile, in Jujuy, the measure will take effect from next Friday as a preventive measure to prevent the spread of the coronavirus, authorities from the Emergency Operating Committee (COE) reported.

The measure was resolved last night “after an in-depth analysis and consensus among health specialists,” said Governor Gerardo Morales through his Facebook account.

It also warned that “Failure to comply with this new measure will generate a fine of one thousand pesos.” The provincial government’s decision responds “to the need to prevent possible coronavirus infections due to the possibility of transit of people on public roads who are asymptomatic of the aforementioned disease,” he said.

In this sense, the authorities of the COE in their latest report recommended the chinstrap from Monday 6 on the provincial level and the mandatory use of it from Friday 10.

“The chinstrap is a new prevention tool that seeks to avoid the transmission of the virus between people and must continue to be accompanied by all the recommendations such as hand washing, the use of gel alcohol and social distancing,” Morales said.

From day one the World Health Organization (WHO) advised against its use in people who were not infected, reserving it only for health professionals or for those who were in contact with any positive or suspicious case. Also for those with frequent coughs or sneezes.

“The WHO is gathering all the available evidence and continues to evaluate the potential use of masks more broadly to control the transmission of COVID-19 at the community level,” explained the organization’s director general, Dr. Tedros Adhanom Ghebreyesus, at a press conference. “It is still a very new virus and we are learning all the time,” he added.

Faced with this concern, the infectious medicine doctor Robert Debbag (M.N. 60.253) with the graduates Carla Mattio and Eliana Andión, published a video with recommendations for the correct preparation of chinstraps or surgical masks.

Most countries followed WHO’s guidelines almost without question, but that is changing. In the Czech Republic, Israel, Australia, some regions of Germany, and several Asian countries, They recommend or require this sanitary element for its inhabitants when driving.

U.S He is another of the main actors in this controversy. First they underestimated the virus, then they discouraged the use of chinstraps, and now, it seems they are backing down and will recommend them to contain COVID-19 in critical areas, according to the BBC. The Spanish government will also ask its population to take them on the street.

He flew! During the pandemic the chicken hit the record

show of force at a giant military parade in Pyongyang

“Poverty and unemployment are going to get worse”

Paloma Cuevas is excited to remember her brother who died six...

what benefits do you get to earn with Bitcoin / Argentina...