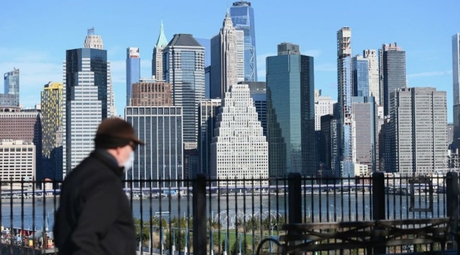 The state of New York is the most affected in the country, with 113,704 cases and more than 63,000 in the city, according to the governor.

The number of people infected with the coronavirus in the United States It exceeded 300,000 this Saturday, with more than 8,000 dead across the country, according to the latest data from Johns Hopkin University.

The threshold of 200,000 cases in the United States had been exceeded on Wednesday.

In addition, the count of the aforementioned university confirmed that Spain is already the second country with the most cases of coronavirus in the world, with 124,736 infections, only behind the United States and for the first time ahead of Italy, which nevertheless continues to hold the world record for deaths from the disease.

In addition, the death toll in the state of New York, epicenter of the coronavirus pandemic in the United States, climbed to 3,565 this Saturday after registering a record 630 deaths in the last 24 hours, reported Governor Andrew Cuomo.

Thus, the number of confirmed cases in the state grew to 113,704, with 63,306 in New York City alone. According to Cuomo, the peak of the epidemic has not yet been reached, but it is closer.

On Friday, the United States government recommended covering his face in public to avoid coronavirus infections, although President Donald Trump said he will not follow that suggestion.

The Centers for Disease Control and Prevention (CDC) updated its recommendations, which now also urge citizens to use pieces of cloth to cover their faces when in public.

“The CDC is recommending the use of non-medical face masks as an additional voluntary measure. It is voluntary, it should not be done, I do not think I will do it,” the president announced at a press conference, although he said that ” it might be a good thing. “

The Nation will grant tax benefits to automotive companies

After the appearance of the first coronavirus case, the Government of...

Without being able to say goodbye, the father of the sisters...

One week in quarantine: more than 8 thousand detainees, historical drops...

the best trick to hide the “typing …”

The Afip established a mechanism for employers to request the loss...