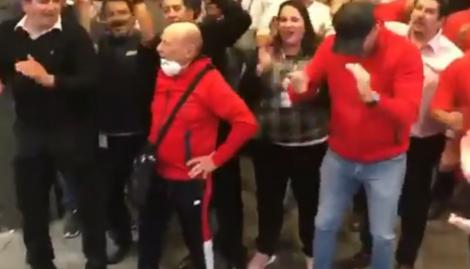 Municipal inspectors of La Matanza ordered the closure of a Coto supermarket on Thursday due to an operational failure. This Friday, the chain’s owner led a protest against the measure.

“They prepared an act because they found that we had cakes with other foods stored in the same freezer and today they tried to finalize the closure. It’s a technicality to shut us down and they didn’t give us a real reason“they assured from the chain.

In response to the sanction, workers at the supermarket located in Ramos Mejía protested at the door. In front of them was Alfredo Coto and his wife Gloria, both with chinstraps, although poorly placed.

The businessman criticized the local mayor: “We do not know why they want to close us down. Fernando Espinoza (the communal chief) has a personal anger against me and it is something that I do not understand because we are job generators. They cannot do this to us and less in the current situation “explained Coto.

And he stated that Espinoza should go talk to him and “inspect the market together.” “There are many rulers, mayors and even Alberto [Fernández] supports us, this man [Espinoza] he’s out of his mind to come here to talk to me and my lady. Evidently he is not the right man to govern La Matanza, “said the businessman in dialogue with Telefe News.

For his part, his wife added: “Since 2008, 500 jobs have been closed because this man was sung to, he is capricious. This was not a reason for closureHe has a personal problem and we cannot allow it. We are angry that, on a whim, he won’t let us open a branch. “

So far, the authorities of the Municipality of La Matanza have not made public statements in this regard.

Journey into the “little paradise” of the Bolsonarists

Markets fall again, concerned about the advance of the epidemic in...

8 images that will reveal something profound about you / Argentina...

Coronavirus: 13 doctors from the hospital that Kicillof visited in San...

Viviana Canosa gave details of her relationship with Alberto Fernández /...

D’Onofrio will try to convince the River squad to come play...

Today the ANSES 10,000 pesos bonus is collected: complete guide of...