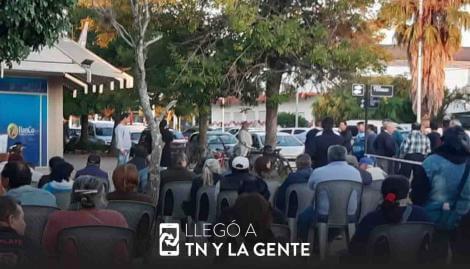 This Friday banks across the country opened their doors for retirees and pensioners to collect their assets. Since dawn they formed long lines in front of the entities and there was no organization.

However, in many cities the postcard was different. Grandparents They offered chairs, placed chemical toilets and respected the recommended distance. These are the images shared by users of TN and The People.

– In Necochea and Quequén they provided assistance to the retirees who went to the banks: they gave them chairs and they took the pressure.

– In Villa Gesell payment to retirees and pensioners was also organized.

– Luciana congratulates the security forces and authorities of the province of Jujuy that organized people in chairs and complying with the recommended distances so that the most vulnerable are protected.

– In Monte Caseros, Corrientes province, There was also a good organization.

– In the town of El Carril, in the province of Salta, also assisted retirees.

The video of two brothers isolated by land grabs in Río...

Landslide in Myanmar’s jade mine causes at least 50 deaths