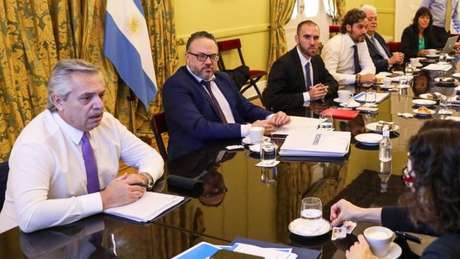 There is deep unease in the Government due to the actions that the financial system has been playing in the crisis. Matías Kulfas the voice of that anger

Just as the pandemic is spreading, the same is also true with the Government’s sights on the critical sectors to address the situation. First were the food factories and then the supermarkets, with the aim of ensuring supply and compliance with maximum prices. Now it was the banks’ turn.

There is deep unease in the Government due to the actions that the financial system has been playing in the crisis. Matías Kulfas, Minister of Productive Development, is the one who acts as spokesman for this anger.

“We need banks to commit much more,” said Kulfas. “We have had very strong discussions with them,” he added. The minister asked for greater commitment from financial entities to help small and medium-sized companies with the payment of workers’ wages through loans at a preferential rate that the government ordered.

Large numbers of SMEs have complained in recent hours about the default of banks. In fact, some 80 representative chambers of small and medium-sized companies demanded that private banks and also public banks put in place the mechanisms already designed, which allow them to “overcome in the best and fastest way the effects of economic inactivity due to the coronavirus” .

Among entrepreneurs there is a real ghost: that the chain of payments is cut.

According to the document prepared by businessmen and merchants, they warned that “the stock of deferred checks negotiated by SMEs held by banks is around $ 220,000 million”, of which “between 35% and 40% expires in April, that is, during quarantine and post quarantine. “

To this “are added the portfolio securities that were not deposited and the invoices issued that should have been collected in this period,” they added.

The behavior of the banks in the crisis led to internal differences between the national cabinet and the Central Bank. Unlike Kulfas, the head of the BCRA, Miguel Pesce, maintains that the banks show responsibility for the crisis, and that in the coming days there will be massive compliance with the granting of the lines at an interest rate of 24% per year for working capital.

What’s more: Kulfas is in favor of banks lending to SMEs directly at a rate of 0%. That banks go straight to loss on those lines.

In fact, in the last few hours a supposed decree of necessity and urgency transpired by which financial institutions were obliged to lend to small companies at a zero rate.

Some official offices maintain that this project was written by Kulfas himself, but that Alberto Fernández finally ruled out that extreme measure, in clear support for Pesce, a man very close to the head of state.

The internal fight is undeniable. Also the pressure on the financial system. The dynamics of the crisis will be the one that, surely, will put the dispute at its right point.

Coronavirus in Querétaro: UAQ developed an economic test that has already...

Retail sales in Córdoba plummeted 54.1% during May

Coca Cola will invest $ 770 million in financial aid to...

Unity is strength, and recycling too

For Me: women “influencers” | The voice

In Nagorno-Karabakh, the haunting “drone war”

Insecurity: crime reports in the province of Buenos Aires doubled since...

How many do you see of the same color? / Argentina...

More Argentines bet on fixed terms: did they win or lose?