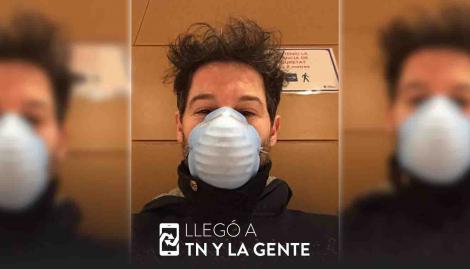 Now Emanuel is in better health, but he spent days of great concern because he got coronavirus. “I thought I was dying”he said in dialogue with TN and The People.

The 43-year-old is a physical trainer and teaches Pilates in Andorra, where he lives for six months. He has an active social life and is healthy.

Before compulsory quarantine was decreed, he had already stopped going to work, so he suspects that the contagion came from a friend who traveled from Buenos Aires and stopped in Barcelona until you get home. “She was doing fine, but after a few days I started with a cough, fever, sore throat and trouble breathing,” he said.

“Before I was detected, the coronavirus was being treated for cold, sinusitis and an infection in the respiratory tract. Took antibiotics and when I got the Covid-19 I really got very serious, “Emanuel explained.

The Andorran government enabled the numbers 188 and 116 so that people can call and get advice, but as it happens in almost all countries they are collapsed. So the young man was unable to report as soon as the symptoms appeared.

With the passing of days Emanuel’s picture worsened. “I passed out in the bathroom. I don’t know how long I was lying on the floor. When I recovered I called emergencies and they made me go to a hospital to do the test that ended up being positive, “he said.

The truth is that despite the seriousness of the case, they did not leave him hospitalized. They sent him home to quarantine and take paracetamol. Doctors call him several times a day to follow up on his case.

“I was detected with the disease on March 26, but I suspect I had it long before. Now I have a cough and fatigue. They told me that I will be cured when I no longer have symptoms. I estimate it will be 10 more days. With my sister who also lives in Andorra and a friend we set up a WhatsApp group to communicate. They are fine and they are the ones who go to the supermarket and bring me food. They leave the bag at the door and I’m going to look for it. We have no contact“concluded the young man.

For her part, her friend was able to return to Buenos Aires and is staying in a hotel. respecting the mandatory quarantine.