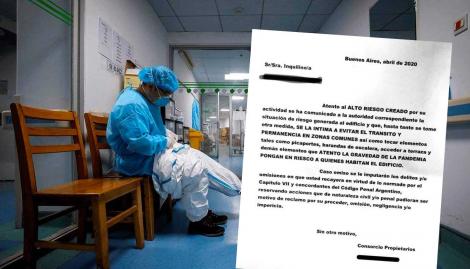 A doctor moved to a building in the Buenos Aires neighborhood of Belgrano on March 31, but, far from having a good reception, the neighbors warned her that, due to the coronavirus and her profession, they would accuse her if she put the neighbors’ health at risk. . But now those who threatened to report it ended up being denounced for discrimination.

Vadim Mischanchuklawyer of the Association of Municipal Doctors of the City of Buenos Aires, filed the complaint against the residents of the doctor for the discrimination suffered.

Someone from the consortium had left the following message under the door: “Aware of their high risk created by their activity, the risk situation generated in the building has been communicated to the corresponding authority and that, until another measure, is intimate to avoid traffic and permanence in common areas as well as touching elements such as doorknobs, stair railings, access to the terrace and other elements attentive to the severity of the pandemic. “

“Ignore The crimes and / or omissions in which you relapse will be imputed to you by virtue of the provisions of chapter VII and concordants of the Argentine Penal Code, reserving actions of a civil and / or criminal nature could be grounds for claim for its proceeding, omission, negligence and / or impropriety, “they warned him.

Now, the doctor’s attorney used that letter as evidence of the discrimination: “As will be seen in said poster, not only are health personnel treated in a discriminatory manner, but they are also threatened with initiating legal actions against them in a completely arbitrary and intimidating manner.”

TN He was in the building, but the neighbors did not want to speak on camera, but they targeted the owner of that apartment because he rented it from March 26 to 29 to a father with his daughter to do the mandatory quarantine after returning from Spain. Two days later, he was rented to this doctor.

Thursday weather: drizzles in the morning and partly cloudy in the...

The Cordoba Mobbex closed an agreement with Visa and aims to...

Angelina Jolie’s latest decision that has shaken the foundations of her...

HBO Max: when will it arrive in Latin America and what...

I stay at home: from birthdays and virtual dances to shopping...

Sheraton conditions its continuity to adherence to the voluntary retirement plan

Unpublished video of Diego dancing after fracturing in Barcelona / Argentina...