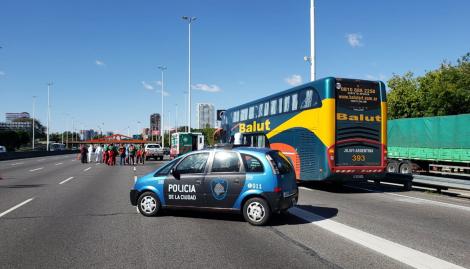 After more than 30 hours of travel, despite being prohibited by the mandatory quarantine established by the coronavirus, he was detained in General Paz a bus that left Jujuy with 62 foreigners on board, and after some controls it was confirmed that a passenger has a fever.

The vehicle did not have a circulation permit since the routes are closed, but he mobilized through much of the country without being detained.

The passengers are citizens of Peru, Colombia and Venezuela. According to reports, they had all arrived in the country in mid-March and were in a hotel and dining room in La Quiaca.

“There are 62 people in the bus, mostly foreigners. A migration procession will intervene because we find it very irregular“, expressed, the secretary of Justice and Security, Marcelo D’Alessandro.

There they were surprised by the social isolation imposed by the national government, and this Wednesday they put them on a mic without notice, who ended up being detained more than 30 hours later in the City of Buenos Aires.

This is indicated by a permit that the passengers showed, where Pablo Fernando Palomares, secretary of regional integration and international relations of Jujuy, enables them to travel despite the ban. “They are authorized to make the trip by land to the City of Buenos Aires in a transport provided by the province, “he said, adding:” The people carried out the corresponding quarantine. ”

In dialogue with TNAlberto Crescenti, head of SAME, explained that a passenger “has a fever.” “We will take it as a precaution ”, said.