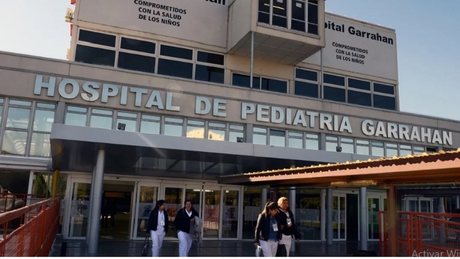 The funds were released by the Federal Oral Court 1 and will be used to meet the most urgent needs of the entity.

The Federal Oral Court (TOF) 1 ordered to “release” in favor of the Garrahan Hospital almost two million dollars of the money seized from the former secretary of Public Works José López in 2016 when he tried to hide them in a convent, judicial sources reported.

The funds will be used to meet the most urgent needs of the Hospital “including those for the improvement and renewal of technology in the pharmacy sector and the high complexity of the hospital, as well as those derived from the recent epidemiological emergency,” said the judges. in the ruling.

The magistrates Adrián Grümberg, José Michilini and Ricardo Basílica they had arranged last June that the almost nine million dollars that were confiscated from López be made available to Garraham and the Ricardo Gutiérrez (Children’s) Hospital in equal parts, but the process had been blocked before a series of appeals that he filed the damned former official.

Once the legal obstacles had been overcome, the members of the TOF 1 insisted the designated hospitals to present projects for the use of money –with their respective budgets- to deliver the money; decision that was accelerated by the advance of the coronavirus.

In this context, TOF 1 resolved this Wednesday “to release, for the moment, the sum of 1,275,700 pesos -or its equivalent in dollars- and 1,988,139 dollars in favor of the Garraham Hospital, so that it can quickly face the expenses of their priority demands, this based on the confiscation ordered in the judgment handed down on June 12, 2019 “.

He also ordered “to carry out, through the Central Bank of the Argentine Republic and by authorized official electronic means, the necessary and urgent steps to effectuate, with the greatest possible haste, the delivery of the funds to the institution.”

The resources will be used, among other things, for the purchase of a medication packer with ampoules and tablets, a state-of-the-art 4D echograph and two video electro-encephalograms.

They will also be used to purchase fans, stop carts with a defibrillator, 3D Trideo Dual printer supplies, triple layer surgical chinstraps and protective goggles, according to the details presented in the TOF 1 ruling.

The judges remarked that regarding the “release of funds in favor of the Gutiérrez Hospital, they must await the pending response” and that was requested by the court “on repeated occasions.”

López was tried for illicit enrichment for the purchase of a house in Tigre and an apartment on Las Heras Avenue in the city of Buenos Aires, which he would have placed in the name of figureheads and for the almost 9 million dollars with which he was detained during the early morning of June 14, 2016.

TOF 1 sentenced him to six years in prison, a sentence that was appealed by the defense of the former official and is still not final.

Strong security measures at the US consulate in Chengdu after China...

They question the creation of a new tax for those who...

RANKING of the SIGNS that can do the most DAMAGE /...

A new edition of the International Entrepreneurs Forum arrives

Complaints about the bad smell of water: what explanation did Aysa...

Ruggeri’s wild question to Gorosito and the day that Pipo burned...