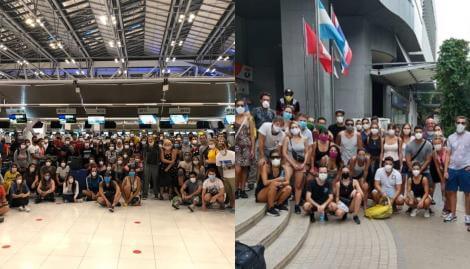 Thousands of people are still stranded abroad after the government restricted entry to the country due to the coronavirus pandemic. In Thailand there are about 400 Argentines desperate to go home. “We are trapped with no way out and without help of any kind,” they claimed.

Laura Andreacchio is a producer of TN and one of the 200 Argentines that weeks ago tried, without success, return from Bangkok to Buenos Aires to comply with the mandatory quarantine in his country, close to his family.

On March 5 Laura and her husband went to Thailand for their honeymoon. “When we learned about the measures they were starting to take around the world, the first thing we did was try to talk to the airline,” he said. Initially the couple had return tickets for this March 31, but a week earlier, the company they were traveling for canceled their flight.

The journalist said that, at that time, they tried to travel on different airlines, but their reality was that of so many other people who also wanted to return home. The companies prioritized tourists who already had tickets previously purchased, so getting a flight became an almost impossible mission.

“We got a ticket to Ezeiza, but hours later the decree that closed the borders came out “, Andreacchio related.

Those days they became a walk through the offices of the different airlines. Between back and forth, many got tickets to fly to San Pablo. The Argentine embassy had recommended that, given the impossibility of returning to the country, they should get as close as possible. But shortly before they were able to complete the trip, the Brazilian government decided to close the borders.

“We called the company and they said they didn’t know anything,” he said in dialogue with TN.com.ar. “The night the flight was leaving we all went to the airport. At the time of check-in we were divided into two groups: Brazilians and Chileans on the one hand; Argentines and Uruguayans on the other,” he added.

An hour later they gave them a news that invaded them of impotence once again: the company spoke with the foreign ministries of Uruguay and Argentina, where they were told that “There was nothing to do”.

“We have bought two tickets and no possibility of returning to the country”, Laura highlighted. His story is that of hundreds of Argentines who await good news and actively follow the news in the hope that the Argentine Government will allow them to return home.

Is it appropriate after interest rates rise?

Coronavirus in Argentina | After 70 years of history, the oldest...

how the Argentine AirBnB works that charges in pesos / Argentina...

Ali Erbas, at the center of the politico-religious choreography that takes...

Coronavirus in Mendoza | He was quarantined in a hotel, he...

John Voight’s defense of Trump drives him away from his daughter...

The new strict quarantine in the City: they suspend physical activity,...

CABLEVISIÓN releases the FLOW APP for its clients in Argentina at...