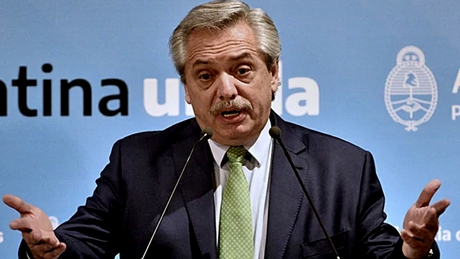 They do not defend Paolo Rocca. But they complain about the “miserable” accusation they received. And they also ask for bank attention for the payment of wages

Although they understood that the message was for Paolo Rocca, the most important businessmen in the country felt alluded to by the harsh phrase launched by the President Alberto Fernández against employers who are laying off staff at this time of health and economic crisis caused by the coronavirus.

“They are miserable”, the Head of States had defined to the businessmen, very angry at the news of layoffs in quarantine. Although the President generalized the criticism, it was clear that the main recipient of his anger was the owner of the largest industrial holding company in Argentina.

That is, the Techint Group that, in full social isolation and with a large number of economic sectors without activity, announced the dismissal of 1,450 workers hired by his construction company.

In fact, the Ministry of Labor had to intervene in the case dictating the compulsory conciliation for 15 days, and prevented the largest steel manufacturer in the country from specifying the layoffs. At least, until after the end of the mandatory quarantine, extended in the last hours until next April 13.

Although the executives consulted by iProfessional They also questioned the “timing” chosen by the group of Paolo Rocca To make this decision, they warned that the economic crisis that will arise after the coronavirus will not leave the sector without damage. Neither small and medium-sized companies, commercial premises, tourism, gastronomy, nor even large companies.

These are not positions taken from the Argentine Industrial Union (UIA) or from the Argentine Chamber of Commerce (CAC), nor since Argentine Business Association (AEA). That is, from the main industrial and business organizations in the country, but from common opinions throughout the corporate sphere.

Despite government aid to a large number of sectors, the businessman’s anger at the President is due to the fact that the scenario will be dire for everyone, even for large groups such as Techint. This, in the framework of an economy that had already been hit by the recession and that from the mandatory quarantine will deepen its fall to levels that will put many sectors on the verge of bankruptcy.

In this framework, they coincide with part of the tweet made public by Alberto Fernández, in which he assures that “nobody saves himself alone”. But they are frustrated by the rest, in which the Head of State asks them to “show solidarity, put themselves in the other’s place and help him”, and angry at the end of the message in which he describes them as “miserable people who forget to those who work for them and in the crisis fire them. “

As I said in the G20, no one is saved alone. You have to be supportive, put yourself in the other’s place and help them. Some wretches forget those who work for them and fire them in the crisis. He spoke to those wretches @Pontifex_es. Now I tell you that I will not let you do it. pic.twitter.com/IfjTB45t6I

The message “fell ill”, admitted one of the industrialists with the greatest interference among his colleagues, who also said that during this Monday, March 30, there were innumerable telephone contacts and video calls where he spoke of the criticism of the Head of State.

“We have all been losing for several years now and that is why we know that from this next one no one is saved either, which is why it hurts us that Fernández has reacted in this way” confesses an executive from the industrial sector consulted by iProfessional.

Another businessman remembers two of the latest initiatives in which the corporate sector participates with the aim of raising funds to help purchase supplies to combat quarantine.

One is the one that seeks to raise $ 100 million for the purchase of supplies and respirators, which is driven by Rubén Cherñajovsky, President of Newsan, the main local electrical appliance manufacturers, and which was widely publicized.

It was christened “Argentina Needs Us” and pursues fundraising aimed at strengthening the public-private health system by purchasing beds, appliances and supplies to successfully confront the coronavirus pandemic.

The campaign has already been launched and is articulated through an account in the Argentine Red Cross to finance the purchase of respirators and other medical supplies that help when the worst moments of this health crisis arrive in the country.

The other campaign, with less exposure by express request of the participating businessmen, is known as #SeamosUno and also seeks to raise funds to acquire food and cleaning units that will be distributed to people who need it most.

In this case, he is at the head of a number of social and religious organizations and some of the country’s most powerful businessmen who, unlike the owner of Newsan, prefer to remain anonymous.

It is also made up of CIAS-Compañía de Jesús; Caritas; Food Bank; the Council of Evangelical Pastors; AMIA; ACIERA-Christian Alliance of Evangelical Churches of the Argentine Republic and other business organizations.

Together, they intend to articulate an exhaustive process of collection, product acquisition, assembly and control and delivery of boxes, all audited by companies of national and international renown that ensure the transparency of the process.

“We are facing a tsunami that we do not know the size of the wave that will hit us; we are distressed by the uncertainty, both of the effects of the virus and of the recession that is growing in the homes of those who did not eat today and do not know if They are going to eat tomorrow “, explain their organizers.

With this background scenario, there is no businessman who does not ask the Government and President Alberto Fernández not to lose the axis of his leadership criticizing the corporate sector and focus on taking more measures that benefit a long list of independent workers, informal or crooks that lost their source of daily income and to whom the social policy does not reach regularly.

They also demand that he intercede with the banking union to ensure that financial entities reopen even partially, not only to attend to the payment to retirees or to sectors subsidized by the State.

They warn about the need for companies, of any size and sector, to deposit funds and pay salaries from the end of this week, when the liquidation of the March salary will begin but with closed banks and with a large number of complicated operations, such as check discount and clearing, among others.

For the executives, instead of questioning everyone, the President should give names because in this crisis we are all complicated, there is no industrial, commercial or service sector that can emerge unscathed from this crisis caused by the disastrous effects that compulsory isolation it will spread in the already weak Argentine economy.

“We want to collaborate because we understand that we all came out of this together, that it is a collective construction and that is why we believe that this is not the time to avoid responsibilities,” argue the businessmen consulted by iProfessional.

In this sense, they also ask banks to “put their grain of sand” and reopen their activities to allow the payment chain to not be cut and the problems that are already accumulating as the days of quarantine by coronavirus.

“Let them do as in Spain and Italy, who suffer the coronavirus worse than we do and in any case the banks continue to attend, albeit in a more limited way, but understanding that they are essential to sustain the payment chain,” they claim from the commerce sector.

Until now, the decision that banks should remain closed has caused a large number of personal dramas, especially among the sectors most vulnerable to the virus, such as that of retirees who on this day turned almost massively to bank branches to access an ATM.

A postcard that reflects that much of the local economy is still run on cash and away from computerized applications and transactions. Bars, restaurants, kiosks, warehouses, markets, shops, pharmacies, service stations and a large number of informal activities require “cash” to live. And if they do not obtain it, as is happening in these times, they put their own survival at risk and help weaken the payment chain.

Tasks, professions in sectors that cannot deposit the millions of pesos that are collected through ATMs on a daily basis, but rather need the help of a bank executive to carry out operations, both for the collection and payment of their obligations.

“That the banks reopen is essential, especially when there are few days left to pay wages, something that they are putting at risk without making the reasons clear, since there are other sectors whose personnel work taking the precautions of the case,” argue from the sector of tourism.

As in this case, all the businessmen consulted agree that there are urgent issues to resolve, but that there are also other priority problems to which to pay greater attention, such as ensuring that all the links in the payment chain are in a position to avoid the widespread breakdown of the Argentine economy.

A forecast that, for the executives, could end up being a certainty if the Government does not find the formulas to put another mandatory stage of isolation on track with an economic path that allows clearing the black ghosts that are coming for all.

this is what google knows about your life / Argentina News

The frightened of the Rivera brothers in the funeral home of...

The impact of the quarantine: despite the opening, there are 13,300...

When will the price go up again? / Argentina News

Brent falls to a minimum of 21 years due to sales...

What do you see first in the picture? / Argentina News

Crime of Fabián Gutiérrez: the suggestive links of the family lawyers...