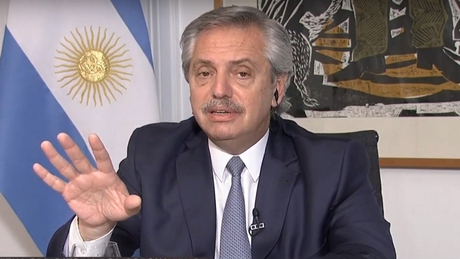 President Alberto Fernández has held a videoconference from 18:00 with governors from all over the country from the Quinta de Olivos, official sources told Télam.

The videoconference took place after the meeting that the head of state held together with his cabinet ministers and infectologists and experts from the Crisis Committee, also in Olivos, this afternoon.

Ginés González García, explained at a press conference that “everyone has unanimously believed that the quarantine must be extended.” In addition, the official anticipated that in the course of today, the head of state will make the announcement with the details of the extension.

“I understand that the President of the Nation, who is spearheading this strategy, is going to speak to the Argentine Nation, I do not know exactly what time,” he said.

On the advance of the pandemic in Argentina, he stated: “Every day we are better, better in preparation, better in resources. So far we have come below the simulation curve. “

And I add: “Do not be scared, it will be natural for the curve to increase due to the cycle of the disease and the diagnostic improvement of the country “.

On how the conditions of the extension of the isolation would be, Ginés did not give details but warned: “From March 20 it is for the entire population except for those who fulfill essential services. The suggestion given by the group is that the extension should continue in the same way”.

The experts who were included were the WHO / PAHO Special Ambassador for Latin America and the Caribbean, Mirta Roses; the scientific director of the Guest Foundation, Pedro Cahn; the head of the Argentine Society of Infectious Diseases, Omar Sued, and specialists Angela Gentile, chief of epidemiology at the Ricardo Gutiérrez Hospital, Pablo Bonvehi, the former president of the Argentine Society of Infectious Diseases, Gustavo Lopardo and Tomás Orduna.

On the side of the officials, the Secretary for Access to Health, Carla Vizzotti, the Head of the Cabinet, Santiago Cafiero, the Minister of the Interior, Eduardo “Wado” De Pedro, the Secretary for Strategic Affairs, Gustavo Béliz, said Secretary General of the Presidency, Julio Vitobello, the Secretary of Communication and Press, Juan Pablo Biondi and Presidential Advisor Alejandro Grimson.